Moretti Romps in Flat Out Stakes

A distant sixth in his lone stakes effort, the 2019 Withers Stakes at Aqueduct Racetrack, the 4-year-old Medaglia d’Oro  colt arrived at the dirt marathon off a May 2 allowance victory at Oaklawn Park, which was his third start of the year.

Piloted by Hall of Fame jockey Javier Castellano, Moretti came out of the gate on top and led the field of nine into the first turn with Expert, Blugrasscat’s Smile, and You’re to Blame keeping close company through an opening quarter in :24.79 over a muddy and sealed main track.

Approaching the half-mile marker, Moretti extended his lead to 2 1/2 lengths, recording the split in :48.97.

Around the far turn, Sir Winston began making up ground and confronted the pacesetter at the mile-marker, but he was no match for Moretti, who kicked clear at the top of the stretch and galloped home under a hand ride.

Moretti won by 5 1/4 lengths in a final time of 2:16.31. Sir Winston edged Expert by a head for second. The order of finish was completed by Rocketry, You’re to Blame, Adventist, Prompt Legit, and Blugrasscat’s Smile. 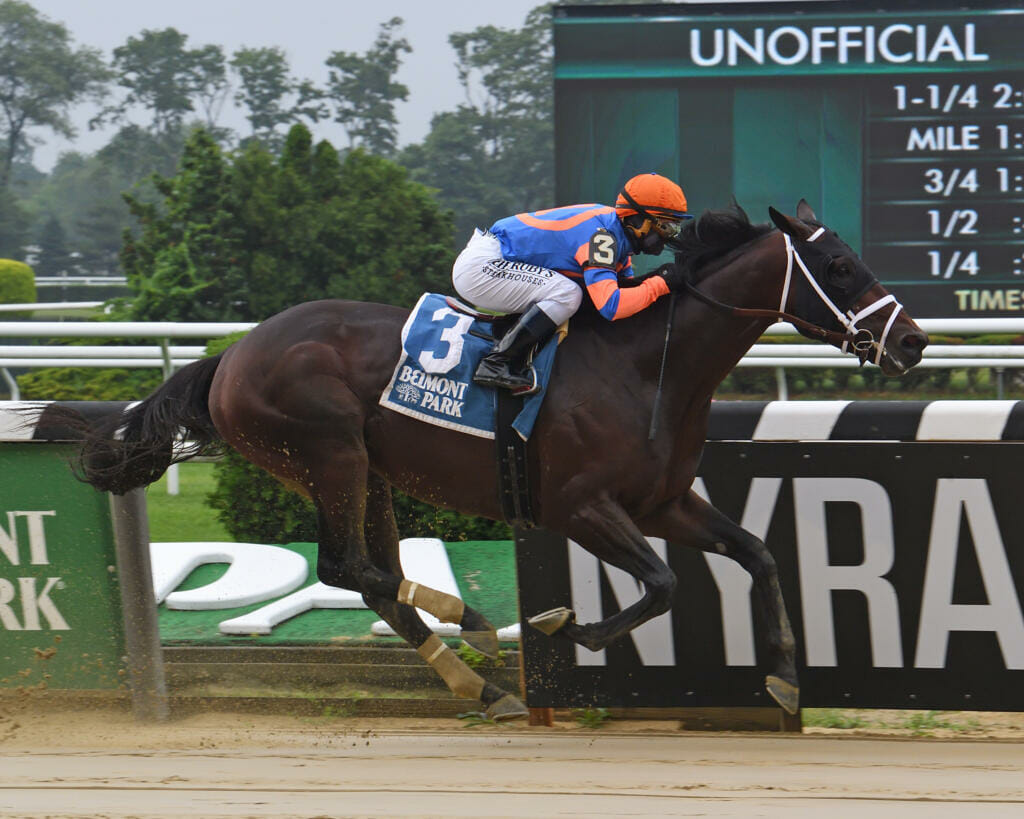 Castellano, who also guided Moretti to his last out allowance victory, believed he might find himself on the lead due to the race’s lack of standout pace.

“The way I handicapped the race, it seemed to me like I was the only speed,” Castellano said. “The horse broke well and I let him dictate the pace. He’s a straightforward horse.”

Pletcher, who won his third straight edition of the Flat Out, was delighted to see everything go according to plan.

“When Javier and I spoke in the paddock, we talked about how he might be the speed of the race,” Pletcher said. “I said just let him run into the first turn and if he found himself comfortably on the lead, that’s great, and if someone else is ambitious, not to get into a pace duel. When he got into that rhythm, it looked like he was travelling really well.”

As Moretti matured, Pletcher said he expected to see improvement out of him. He saw exactly that.

“He’s always been a steady galloper and he seems like he’s come around in his last couple of starts,” Pletcher said. “He’s really found himself and seems like he’s improving, which is really what we expected all along. The older he got, the better he would get.”

Pletcher said the July 4 Suburban Stakes (G2) at Belmont is “in the cards” for his newly-crowned stakes winner.

Bred in Kentucky by Thoro-Bred Stables, Moretti is out of the grade 1-winning Concerto broodmare Rigoletta, who also produced grade 1-winning millionaire Battle of Midway. He was purchased for $900,000 from the 2017 edition of The Saratoga Sale, Fasig-Tipton’s select yearling sale in Saratoga Springs, N.Y., where he was consigned by Gainesway.