March Madness Indeed! Eclipse Sends Out a Quartet this Weekend Coast to Coast

The upcoming weekend will be busy for the baby blue and black silks of Eclipse Thoroughbred Partners. We have horses racing across the country, two in Florida and two in California.

While Patrioticandproud’s appearance in the $1 Million Santa Anita Handicap (Grade I) is the highlight, we will begin the weekend with Feathered’s return to action in an Allowance race at Gulfstream Park on Friday. This three-year-old daughter of Indian Charlie was entered to run this past Saturday at Gulfstream however racing was cancelled after the fifth race when torrential rain hit the area. It has been rescheduled as the tenth race at 5:30 PM EST. The distance is seven furlongs and she will be ridden by Eclipse Award-winning jockey Javier Castellano.

Trained by Todd Pletcher, Feathered broke her maiden in her second career start winning by ten lengths at Saratoga last August. She continued her two-year-old campaign finishing third in the $500,000 Frizette Stakes (Grade I) (Belmont) and fourth in the 14 Hands Breeders’ Cup Juvenile Fillies (Grade I) at Santa Anita. Feathered completed the year finishing second to Champion Two-Year-Old Filly Take Charge Brandi in the $350,000 Starlet Stakes (Grade I) beaten only one-half length at Los Alamitos. Only four fillies were ranked above Feathered in the 2014 Experimental Free Handicap. 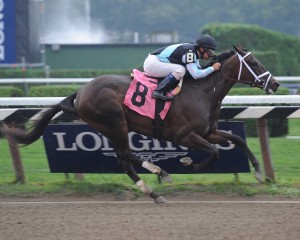 A big effort in this race puts Feathered on the trail leading to the Kentucky Oaks on the first Friday in May.

On Saturday, Patrioticandproud will run in the featured event at Santa Anita, the $1 Million Santa Anita Handicap (Grade I). The initial proud color-bearer of the Eclipse Thoroughbred Partners silks back in October 2011, Patrioticandproud has gone to the post 28 times amassing earnings of $492,855. Trained throughout his career by Mark Casse, this six-year-old son of Proud Citizen has won the $150,000 Toronto Cup Stakes (Woodbine) and placed in seven other graded events. He has shown great versatility handling any type of surface – dirt, turf and synthetic. Patrioticandproud has raced in Canada and five states stretching from California to Florida.

The Santa Anita Handicap will cover the classic distance of one mile and one-quarter going as the eleventh race at 5:00 PM PST. Elvis Trujillo will ride. 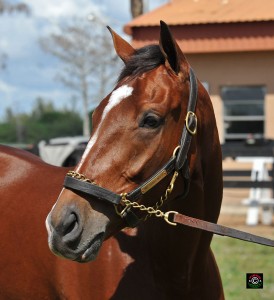 No Surrender, purchased by ETP last March, will run in the $60,000 Challenger Stakes at Tampa Bay Downs on Saturday. He also was scheduled to run last Saturday at Gulfstream but the rain hit before his scheduled post-time. In his first appearance for ETP on Kentucky Derby Day, No Surrender broke on top in an Allowance race and never looked back winning by a half-length. After a lackluster performance in the $150,000 Easy Goer Stakes on Belmont Day, this four-year-old son of Into Mischief was then given a vacation. Over the past six weeks, he has been training “lights out” in the morning for Todd Pletcher in Florida and we look forward to seeing him race that way in the afternoon. The Challenger Stakes will cover a distance of one mile and one-sixteenth. Going as the eighth race at 3:53 PM EST, No Surrender will be ridden by Irad Ortiz, Jr.

Whisk, a three-year-old daughter of Elusive Quality, will make her second career start covering six and one-half furlongs down the hill over the Santa Anita turf course. Trained by Michael McCarthy, Whisk finished mid-pack in a very educational race in early February and we expect she’ll move forward on Saturday. Meet leading rider Rafael Bejarano will ride Whisk in the third race at 1:00 PM PST.