The Curlin filly leads a field of seven older fillies in sTampa Bay Downs’ second race, the Manatee Overnight Handicap going seven furlongs. Point of Honor will carry the high weight of 124 pounds and travel a distance shorter than her preferred trip off the bench.

After making the decision last fall to shut Point of Honor down and regroup for 2020, Eclipse Thoroughbreds Partners’ Aron Wellman said, “She is perfectly fine physically, but she had a hard, successful campaign and we wanted to freshen her for what we envision being a major 4-year-old campaign.”

Eclipse campaigns Point of Honor along with Stetson Racing.

Last season, the George Weaver trainee emerged when winning over this track in the Suncoast Stakes. Two starts later, she registered a graded score on Preakness Stakes weekend in the Black-Eyed Susan (G2).

Lightly raced with just six career starts to her name, Point of Honor finished her campaign with a second in the Coaching Club American Oaks (G1) before the Alabama.

Regular jockey Javier Castellano has the assignment as Point of Honor breaks from post 2 on Saturday. Post time is 12:48 p.m. ET. 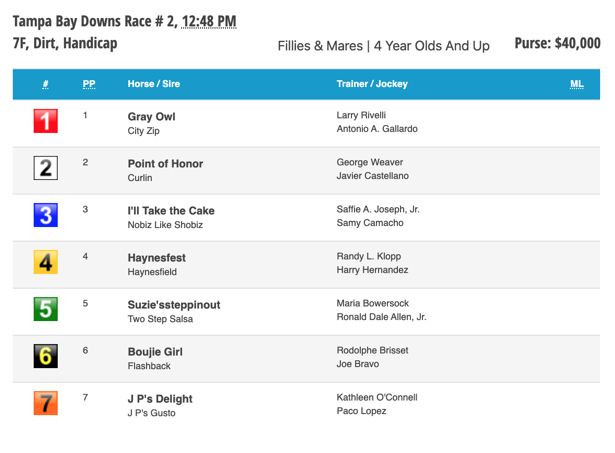