Sharing, the winner of the 2019 edition of the $1 million Breeders’ Cup Juvenile Fillies Turf (G1T) at Santa Anita Park, has been retired from racing after suffering an injury in a paddock mishap in the wake of her 3-year-old season.

Bred by Sagamore Farm, the daughter of Speightstown , out of the 2010 Emirates Airline Breeders’ Cup Filly & Mare Turf (G1T) heroine Shared Account, was purchased as a yearling by Eclipse Thoroughbred Partners for $350,000 in 2018 at The Saratoga Sale, Fasig-Tipton’s select yearling sale in Saratoga Springs, N.Y., and campaigned by Eclipse and Gainesway Farm. She was trained by Graham Motion throughout her career.

At age 2, Sharing broke her maiden going seven furlongs on the dirt at Saratoga Race Course and used a win in the Selima Stakes at Laurel Park to propel her to Breeders’ Cup glory. She was an Eclipse Award finalist and named Maryland-Bred Horse of the Year.

At age 3, Sharing opened her sophomore season by capturing the Tepin Stakes at Churchill Downs. She then enterprisingly ventured to Royal Ascot where she was a gallant second on taxing ground in the Coronation Stakes (G1). Upon return from her Transatlantic quest, Sharing was victorious in the Edgewood Stakes Presented by Forcht Bank (G2T) at Churchill Downs, a narrow fourth versus older fillies and mares in the Matriarch Stakes (G1T) at Del Mar, and in her final start, she was third in the American Oaks (G1T) at Santa Anita, the site of her Breeders’ Cup triumph a year prior. 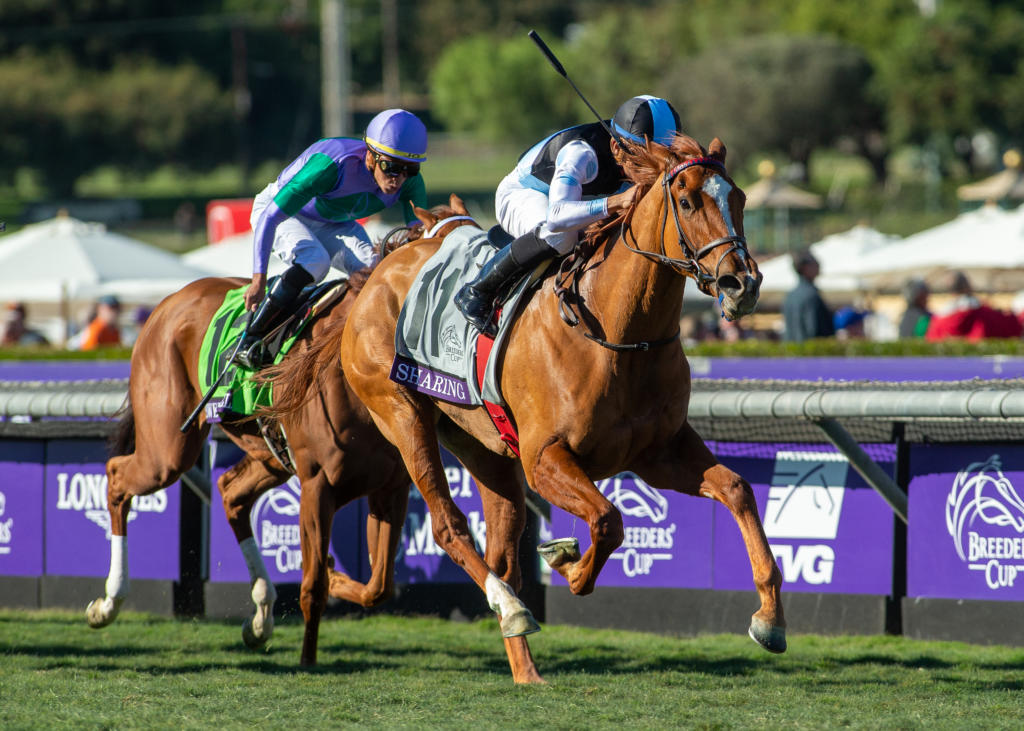 “Sharing battled through foot issues all throughout her 3 year-old season, but still managed to win major races, travel the country, and represent our partnership at Royal Ascot with a brilliant second in a group 1. We had designs on a blockbuster campaign this coming season. We’re devastated we won’t be able to enjoy her racing any more, but she is destined to produce special foals for many years to come. In less than 10 years, Eclipse has won 16 grade 1s, but Sharing is unequivocally our best to date. She is as classy as they come.”

“Sharing is a special filly who will go down as one of the best I trained,” said Motion. “Breeders’ Cup wins don’t come too easily.”