Flying Rapunzel personifies the American Dream. A bargain-basement $30,000 yearling acquisition at last year’s Keeneland September sale, the daughter of Tale Of The Cat has earned her way up the ladder from the maiden ranks to the big show. On Saturday, the Eclipse Thoroughbred Partners color bearer will be one of the prime contenders for the Grade 3, $150,000 Arlington Washington Lassie; the premiere 2 year-old filly race of the stand at Arlington Parkin Chi-Town.

Wayne “Cat Man” Catalano has proven to be a master of developing upstart fillies from his base in Illinois and it comes as no surprise that the Cajun has done another superb job with Flying Rapunzel, who he has sent out for a second-place run on debut, which was followed-up by an eye-popping graduation run at 7 furlongs on the Arlington Poly. The Cat Man has legged up Miguel “Miggy” Mena on both of those occasions and will do so again 12 minutes ahead of Saturday’s 4:50pm CT kickoff time. Flying Rapunzel has drawn post 12 of 14 fillies looking to take down the lion’s share of the $150,000 pot up for grabs by crossing the wire first after a taxing 1 mile jaunt around the Arlington oval, which requires just 1 bend.

“Rapunzel is doing great right now,” Cat stated with his usual confidence. “That filly’s done everything right for us from the beginning and she’s really thriving. Her workouts since she broke her maiden have been sharp and I think we’re coming into this race about as good as can be. If she runs like she did when she broke her maiden going 7 furlongs on the stretch out to a mile, we’re going to be in good shape. We like our chances.” 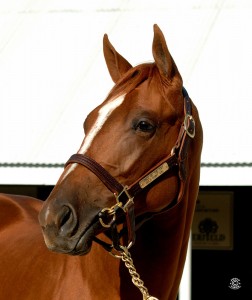 Eclipse President, Aron Wellman, added, “Wayne (Catalano) and his crew have done a terrific job bringing Rapunzel along the right way. They gave her an ideal debut run where she got a tremendous education and when she reappeared, she took a massive leap forward, which is always what you want to see out of a young horse who offered promise on debut.

“It’s always a real gut check when you ask an inexperienced filly to jump from a maiden race into a Graded Stakes, but we like the progression for Rapunzel,” Wellman acknowledged. “We like her foundation, we like that we’ve got home court advantage, we like the spacing of her races, the speed figures make her a serious player and we think the outside post will provide Miguel (Mena) to monitor the race shape and ride accordingly. Rapunzel will have to take another step forward in order to make her case for win honors, and we’re confident she’s postured to make that requisite improvement. We’re excited about her prospects and to have a live contender in an important race at Arlington Park.”

The race can be viewed live on HRTV or online at www.xpressbet.com, www.twinspires.com or www.tvg.com.