Battier will make his West Coast debut on Friday, February 7, in the sixth race at Santa Anita Park, the Great Race Place. Battier, a four-year-old Tale of the Cat colt, joined the Eclipse Thoroughbred Partners stable in April of last year. Since that time, he has run in eight stakes races. Last September, he finished third to Will Take Charge, the 2013 Three-Year-Old Champion and a finalist for Horse of the Year. Battier, coming from off the pace, was beaten a diminishing 2 ½ lengths that day. Now in the care of Michael McCarthy, a long time assistant to Todd Pletcher, Battier will be ridden by Gary Stevens in this one mile Allowance feature at 3:30 PST. 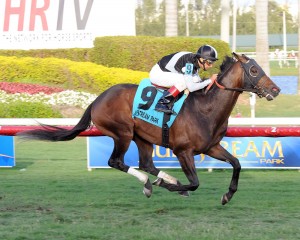 Amira’s Prince returns to action on Sunday in the $300,000 Gulfstream Park Handicap-G1 at Gulfstream Park. Amira’s Prince, a five-year-old son of Teofilo (IRE), began his career in Ireland before being purchased by Eclipse Thoroughbred Partners in the summer of 2012. Upon arriving in the United States, he joined the barn of Hall of Fame trainer Bill Mott and has won four in a row including the Mac Diarmida Stakes-G2 (Gulfstream Park) and the Marvin H. Muniz Jr. Handicap-G2 (Fair Grounds). This horse has been preparing for the kick-off of his 2014 campaign at Payson Park Training Center in Florida. The plan is to be in the major turf events in the spring, summer and fall leading up to the Breeders’ Cup at Santa Anita in November and Eclipse Award consideration. Sunday’s stakes race will be at a distance of one mile and one-eighth on the turf at 5:31 EST.

Miss Lucky Sevens will also run Sunday in the $75,000 Wishing Well Stakes at Santa Anita. A four-year-old daughter of Big Brown, Miss Lucky Sevens was purchased as a yearling in 2011. She broke her maiden in only her second career start as a two-year-old before winning an Allowance race at Keeneland last year. Miss Lucky Sevens then moved to California. While she’ll be facing formidable competition in this stakes, Miss Lucky Sevens has trained up to this spot like a filly that belongs. Trained by Paddy Gallagher, she will be ridden by Rafael Bejarano, the leading rider at the meet. The Wishing Well Stakes will be run at a distance of six and one-half furlongs down the hillside turf course as the eighth race at 4:30 PST.