Eclipse Tied For Leading Owner At Saratoga After Massive Week

Over the past week, the baby blue and black silks of Eclipse Thoroughbred Partners have visited the winner’s circle five times!! Highlighted by Curalina’s (right) win in the $200,000 Shuvee Handicap G3 at Saratoga on Sunday, July 31, Eclipse also has had Patrioticandpround, Cowboy Rhythm, Caribbean and Pinstripe gain victories.

Curalina notched her fourth graded stakes victory in the Shuvee, including Grade I wins in the Acorn , Coaching Club American Oaks last year and the La Troienne this past May.

Curalina sat just off the flank of the Phipps’ Stable Carrumba from the start until turning for home. This four-year-old daughter of Curlin took off at that point quickly opening up a daylight lead and stormed home a 9 ¼ length winner in this nine furlong fixture.

Hall of Fame jockey John Velasquz said, “The only speed was Carrumba and myself, so I wanted to make sure that she did not get away with an easy lead there. When I asked my horse, she responded very well.” Trainer Todd Pletcher commented following the race, “I think she (Curalina) is a little bit of an underrated filly. She was third in the Breeders’ Cup, her first race back this year was really good, and I think her Phipps was better than it looked on paperâ€¦.She’s a good filly and I think she is getting better.”

Eclipse President Aron Wellman summed it up by saying, “It was as easy as it looked, as Curalina cooled out in the blink of an eye and never took a deep breath.”

Curalina has earned $1,375,940 in 11 career starts. She will set her sights on the Grade I Personal Ensign at Saratoga on August 27.

The venerable seven-year-old, Patrioticandproud, found the winner’s circle for the seventh time in his career at Woodbine on Friday, July 29. This son of Proud Citizen was the first horse to appear in Eclipse Thoroughbred Partners’ baby blue and black silks at Woodbine in October, 2011.

Patrioticandproud broke on top and never looked back under jockey Patrick Husbands. He maintained a 1 Â½ length lead pretty much throughout the running of the race. Under the care of Mark Casse, this horse has made 41 career starts amassing earnings of $649,353. Aron Wellman called Patrioticandpround, “Remarkable. Absolutely remarkable.” He noted that the horse has won each year from age 2 through 7. 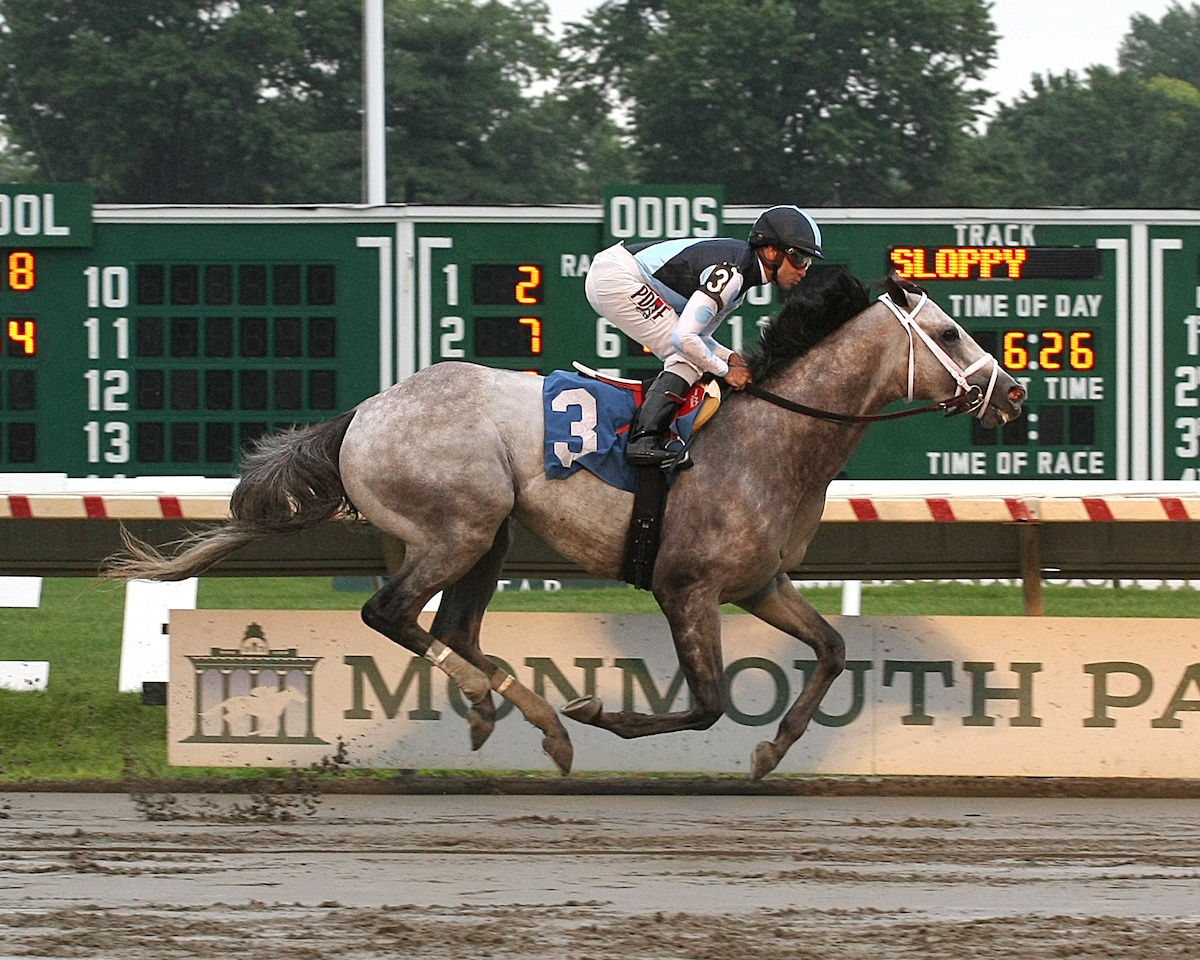 Cowboy Rhythm (left), purchased by Eclipse last November, put forth a dominating performance Sunday, July 31, in his Allowance race at Monmouth Park. Under Joe Bravo, Cowboy Rhythm sat chilly being third behind the leader during the opening half-mile before launching his bid. He quickly took control of the race putting space between himself and the rest of the field coasting home a 3 Â½ length winner.

Wellman says, “Cowboy Rhythm is a lightly raced four-year-old son of Tapit who gets a route of ground, so the sky truly can be the limit.” This colt is trained by Todd Pletcher.

Caribbean, a three-year-old by Harlan’s Holiday, took a step towards showing the potential we have felt he has winning over the slop at Saratoga Sunday, July 31. Originally scheduled for the grass, Caribbean made his first appearance on the main track and also wore blinkers for the first time in a race. Showing improved focus, Caribbean out dueled another in the stretch crossing the finish line 2 lengths in front.

Aron credits the jockey for the victory. He stated, “John Velasquez made a Hall of Fame move to put Caribbean in position going into the first turn and he won the race right there, as he secured prime position and then willed Caribbean to the victory.”

Last Monday, July 25, Pinstripe began the great week for Eclipse getting our first victory at the Saratoga meet. This son of High Cotton went gate to wire winning by 2 Â¾ lengths under Javier Castellano. Pinstripe has made it to the winner’s circle three times in only four career starts under the tutelage of Todd Pletcher.

The three-year-old picture is wide open and Destin is right in the middle of the mix. This son of Giant’s Causeway finished third in the $600,000 Jim Dandy Stakes G2 at Saratoga on Saturday. He was beaten only 1 Â½ lengths and covered 30 feet more than the winner.

Jockey Javier Castellano believes the talent is there, but Destin is still a work in progress in learning to become a true professional racehorse. The colt sometimes loses his focus in the stretch. Trainer Todd Pletcher will have him ready for the $1.25 Million Travers Stakes G1 on August 27.