Eclipse Thoroughbred Partners will have another action-packed Stakes weekend on both coasts. The black and baby blue silks will be carried by one of the stable’s prized Euro-import fillies when She Spirit di Su essays the $70,000 China Doll Stakes at Santa Anita in Southern Californiaon Saturday. On Monday, the stable’s first ever winner, Patrioticadproud, will take aim at the $100,000 OBS Championship Stakes in Ocala, Florida.

She Spirit di Su will kick off the weekend for Eclipse. The daughter of Invincible Spirit was brilliant in her stateside and Eclipse debut 2 months ago when she rocketed home from dead last to win decisively. She threw in a clunker, however, when shortened up in trip in her foray into Stakes company a month later. On Saturday, the bay beauty will look to redeem herself and jump right back to the head of her class when she returns to the mile distance on the lawn at The Great Race Place.

Training prodigy, Simon Callaghan stated of She Spirit di Su, “The filly never turned a hair after the debacle that was her last race. We’ve all decided to simply draw a line through it, as she’s trained sensationally well since the bad run. We tinkered with her equipment a bit, which seems to have helped. We’re not thrilled with the post position (9 of 9), but we’ll just have to take back and make one run. She Spirit is a lovely and talented filly and we think she’ll make great account of herself this weekend. A forward run puts us on course for the Grade 2, $150,000 Providencia Stakes, which has been our goal all winter long.”

David Flores will pilot She Spirit di Su in the China Doll Stakes. The $70,000 fixture goes as the 8th race on the Saturday card at Santa Anita with a post time of 4:07pm PT. 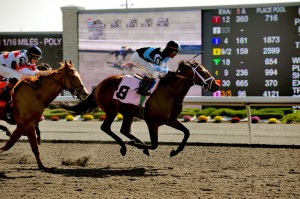 On Monday, Patrioticandproud will tackle a contentious field of 11 sophomore colts set to do battle over the Safetrack inOcala. The son of Proud Citizen was exceptional in his first 2 outings for Eclipse, but didn’t care for the firm turf atGulfstreamParkwhen turning in 1 reasonably decent effort and 1 sub-par showing. The strapping colt has been freshened inOcalafor the past 6 weeks by conditioner Mark Casse and will attempt to spring back to life over his preferred surface: the man-made stuff.

Casse offered, “Patrioticandproud is doing really well. We’ve allowed him to recharge a bit up here and he does seem to like the surface. His best races have come over synthetic tracks, so if we can manage to get a clean trip, we feel as though he’ll be right in the thick of it. He’s a nice colt and we’re hoping this race gets him back in form.”

Patrioticandproud will have Rajiv Maragh in the irons on Monday. The $100,000 OBS Championship Stakes in the headliner of the 4-race Championship series with a post time of 2:30 ET.