Eclipse Looks Ahead to Potentially Monstrous Derby/Oaks Weekend in Kentucky

The baby blue and black silks of Eclipse Thoroughbred Partners will be prominently on display at Churchill Downs on May 2 and 3, Kentucky Derby/Oaks weekend.

Danza, the scintillating winner of the Grade 1 $1,000,000 Arkansas Derby at Oaklawn Park on May 12, will proudly represent ETP in the 140th Grade 1 $2,000,000 The Kentucky Derby, Presented by Yum! Brands for three-year-olds going the classic distance of one mile and one-quarter. Joe Bravo, who rode Danza at Oaklawn with so much confidence, will be on the colt’s back again. This son of Street Boss, trained by Todd Pletcher, has stamped himself as one of the uppermost leaders of the three-year-old division. In only four career starts, he has two wins and two thirds with lifetime earnings of $666,428. After breaking his maiden in his career debut at Belmont Park last June, Danza finished third in the Grade 2 Saratoga Special Stakes in August. Danza was purchased by ETP out of the 2012 Keeneland September Yearling Sale for $105,000.

On Friday, Kentucky Oaks Day, Bajan will run in the Grade 3 $175,000 Eight Belles Stakes for three-year-old fillies going seven furlongs. She will be ridden by Joel Rosario, who just happened to ride Orb to victory in the Kentucky Derby last year. Bajan, a daughter of Speightstown, is coming out of an excellent third in the Grade 1 Santa Anita Oaks under the care of Simon Callaghan. Bajan has three wins, a second and a third in eight career starts with lifetime earnings of $228,692. She was purchased by ETP out of the 2013 Ocala Breeders’ March Two-Year-Old in Training Sale for $80,000. 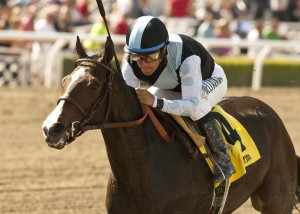 On Saturday, May 3, Capo Bastone, winner of the Grade 1 King’s Bishop Stakes at Saratoga last August, will run in the Grade 2 $400,000 Churchill Downs at, of course, Churchill Downs going seven furlongs. Hall of Fame jockey John Velazquez will be in the saddle. At two, this son of Street Boss, was trained by John Sadler in California. Following a third place finish in the Grade 1 Grey Goose Breeders’ Cup Juvenile and a brief freshening, Capo Bastone joined the stable of Todd Pletcher in South Florida. He has had success over the Churchill surface having been beaten only a neck finishing second in the Grade 3 Derby Trial Stakes last April. 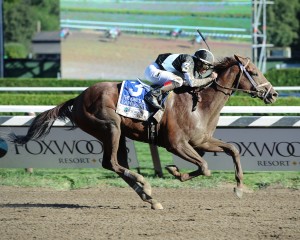 Capo Bastone put it all together in the King’s Bishop at Saratoga last summer covering the same distance as this upcoming stakes at Churchill Downs. Capo Bastone looked like he was shot out of a cannon at the top of the stretch flying down the lane to win by two lengths. Capo Bastone has career earnings of $662,608. He was purchased by Eclipse Thoroughbred Partners out of the 2012 Ocala Breeders’ March Two-Year-Old in Training Sale for $175,000.

Craftsman (IRE) will run in the Grade 2 The American Turf for three-year-olds going one mile and one-sixteenth on the grass as part of the Kentucky Derby Day undercard. This son of Mastercraftsman (IRE), now trained by Simon Callaghan, was purchased by ETP last fall. He won a Group 3 stakes in Ireland over soft turf and we are looking forward to seeing him compete over the Churchill grass which often has plenty of “give” to it.

A recent purchase, No Surrender (Into Mischief), will run in an Allowance race at Churchill Downs on Derby Day. No Surrender was acquired by ETP following a dominating win in only his second career start in Chicago. He earned a 92 Beyer speed figure – rarely heard of for a three-year-old this early in his career.