A fantastic day for the baby blue and black of Eclipse Thoroughbred Partners on Saturday at Gulfstream Park in Florida. War Correspondent earned his first graded stakes victory in the $150,000 Appleton Stakes (Grade 3) and Curalina broke her maiden in only her second career start first time out since last August.

Under a masterful ride by Hall of Fame jockey John Velasquez, War Correspondent was fourth the opening half-mile one and one-half lengths off the lead while racing along the inside. War Correspondent, a five-year-old son of War Front, angled out three wide entering the stretch run. John Velasquez describes the race to the wire, “He was getting there little by little, but once I got to the 16th pole, I was almost sure that he was going to get there. He takes a little bit to get going, but once he gets his stride together, man, he’s sweet.” 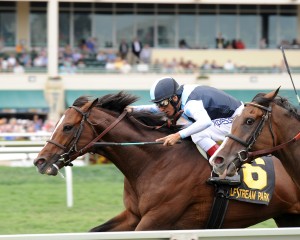 Aron Wellman, President of Eclipse Thoroughbred Partners, said, “War Correspondent has beenunlucky not to have won the Autumn (Grade 2) at Woodbine and/or the Gulfstream Park Turf Handicap (Grade 1), so to get the big one Saturday was hugely gratifying on many levels.”

In only eight career starts, War Correspondent, a full brother to Grade 1 winner Declaration of War, has four wins, two seconds (including the Autumn Stakes) and two thirds (including the Gulfstream Park Turf Handicap). Under the guidance of Christophe Clement, he has career earnings of earnings of $225,189.

Curalina, needing time after finishing second in her career debut at Saratoga last summer, gave a tremendous effort coming off the bench winning at Gulfstream Saturday by a lengthening length. Almost knocked down at the start when the filly to her outside bumped hard into her, the three-year-old daughter of Curlin, was sixth early on and third after a half-mile a half length to the outside of the leaders. While constantly crowded by the filly to her inside throughout the stretch run, Curalina, ridden by John Velasquez, would not be denied. 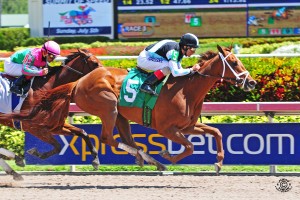 Aron Wellman commented, “Curalina was rightfully asked to make multiple moves up the long backstretch and preserved ideal position despite being tackled from all angles. Her class and superior natural ability allowed her to overcome several obstacles.”

Curalina is trained by Todd Pletcher and will soon head to New York on the lookout for stakes opportunites.