The baby blue and black silks of Eclipse Thoroughbred Partners will be on display across the country over the next four days. No Surrender runs Thursday at Belmont Park in New York. In Kentucky Feathered and Curalina will race on the Kentucky Oaks undercard on Friday. Comfort will race at Churchill Downs Saturday, Kentucky Derby Day. Belle Et Bete returns to action Friday at Santa Anita in California. Passing Pfast returns to action Sunday at Tampa Bay Downs in Florida.

Feathered, Curalina and Comfort are among the brightest stars in the Eclipse stable at this time. Feathered, our hard-trying three-year-old daughter of Indian Charlie, has finished on the board in six of her seven lifetime starts earning $309,834. Second in her career debut at Saratoga last August, Feathered then broke her maiden by ten lengths on closing weekend. Through the rest of the year, Feathered finished a closing third in the $500,000 Frizette Stakes (Grade 1), fourth in the $2 Million 14 Hands Vinery Breeders’ Cup Juvenile Fillies (Grade 1) and second in the $350,000 Starlet Stakes (Grade 1) behind Two-Year-Old Champion Take Charge Brandi. Feathered kicked off her 2015 campaign placing in an Allowance race at Gulfstream. She became very unsettled in the paddock prior to the $400,000 Fantasy Stakes (Grade 3) at Oaklawn Park in March and was unable to put forth the race we know she is capable of. 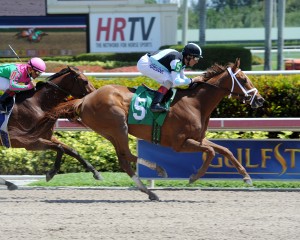 While entered in an Allowance race on Thursday, Feathered will opt for the $150,000 Edgewood Stakes (Grade 3) going as the sixth race on the Kentucky Oaks undercard Friday. The distance is one mile and one-sixteenth on the grass with Eclipse Award winning jockey Javier Castellano riding at 1:26 EST.

Curalina, a three-year-old daughter of Curlin, had ETP very excited last August in Saratoga. A valiant second in her career debut, Curalina was one of the morning line favorites for the Grade 1 Spinaway Stakes. Unfortunately, she suffered bone bruising and had to be scratched. Curalina rejoined trainer Todd Pletcher at Palm Beach Downs in Florida earlier this year and broke her maiden coming off the bench at Gulfstream Park on March 28. She overcame several obstacles showing grit and determination. She bounced out of that effort in top form and takes on Allowance foes in the third race going one mile and one-sixteenth over the Churchill Downs dirt surface. Hall of Famer jockey John Velazquez will ride at 11:30 EST. We believe Curalina is a filly with stakes in her future and look forward to being on that path sooner rather than later.

Comfort, a recent acquisition by Eclipse Thoroughbred Partners, will run at Churchill Downs on the Kentucky Derby Day undercard. Purchased after a dominating performance at Fair Grounds in February, Comfort finished fourth in the $250,000 Coolmore Lexington Stakes (Grade 3) (Keeneland) first time under the Eclipse banner. Trained by Todd Pletcher, this three-year-old son of Indian Charlie has only four career starts always finishing on the board. He has an impressive turn of foot and will only get better and better as his racing career progresses. Comfort runs in the 12th race going one mile and one-sixteenth with Javier Castellano in the irons at 7:35 EST.

No Surrender is another who will attempt to regain his winning form on Thursday. This four-year-old son of Into Mischief was purchased by Eclipse Thoroughbred Partners last April after a winning effort in Chicago. He promptly came back to win an Allowance at Churchill Downs on Kentucky Derby Day. After the $150,000 Easy Goer Stakes on Belmont Day, No Surrender was off for nine months. This will be his second start following the break in action. Trained by Todd Pletcher, No Surrender will cover the one turn mile distance at Belmont Park in the fifth race. He will be ridden by Joel Rosario at 3:24 EST.

While Belle Et Bete has not reached our hopes and expectations yet, we are looking for her to find her way at Santa Anita on Friday afternoon. The three-year-old daughter of Big Bad Bob was purchased last August after capturing two races in Ireland. She has trained and breezed beautifully in the morning but not been able to replicate that form in the afternoon. Trained by Paddy Gallagher, Belle Et Bete will cover about six and one-half furlongs down the Santa Anita turf course hill at 4:00 PST. Flavien Prat will be on her back.

Passing Pfast returns to action after taking the winter off in an Allowance race at Tampa Bay Downs on Sunday. Purchased after a resounding victory at Fair Grounds in her career debut last March, Passing Pfast has registered a second and third for the baby blue and black. It was decided in September this four-year-old daughter of Leroidesanimaux (BRZ) would benefit from a winter break. She joined Arnaud Delacour at Tampa Bay Downs a few months ago and has been training steadily. Passing Pfast is in the ninth race Sunday. This is an Allowance race going one mile on the grass at 4:51 EST. Daniel Centeno will ride.