Eclipse Thoroughbred Partners President Aron Wellman began his Australian racing experience at The Championships at Royal Randwick last Saturday. The Californian admitted that while he enjoyed the day, he doesn’t much like simply being a spectator at a race meeting. Wellman and the Eclipse partners will have a chance to participate in next year’s Championships as an owner, however, after Wellman bought a Pierro (Aus) filly (lot 267) for A$200,000 at the Inglis Easter sale Wednesday.

The filly will be trained by Gai Waterhouse, who made it her mission to get Wellman to an Australian sale after meeting him in Saratoga last summer.

“Gai reached out to myself and my business partner, Brian Spearman, prior to her stateside trip last summer,” Wellman explained. “She’s really intrigued by bringing a partnership company from the States to Australia, and possibly exploring the opportunity of getting us involved down here with the idea of developing horses to import to the United States.”

“Gai is a very enterprising woman, and she has her eye on the States at present,” he continued. “It’s a huge honour to have caught her attention and to have started to develop a relationship with her.”

Wellman admitted his first trip to Australia was intended to be an “exploratory mission” without the need to buy a horse.

“I wanted to get the lay of the land, get to know Gai better, go training with her at Randwick and see her operation and of course, inspect the yearlings and get the feel for the types of horses that work in Australia and the pedigrees,” he explained. “Being able to have all-access to Gai and her team throughout the week on all those levels has been an incredibly eye-opening experience.”

Wellman said one of the most striking aspects of Australian racing for him has been the prominence of partnerships in racehorse ownership.

“I was really taken aback by the ownership culture here in Australia, which is incredibly open-minded and receptive to partnerships,” he noted. “I was astonished to learn that the vast majority of horses that race in Australia are owned by partnerships, and that includes some of the heaviest hitters in the game. Whereas partnerships are prevalent in the States and becoming more and more popular, they’re still the exception to the rule, whereas here they’re the rule. That’s exciting and intriguing for a company like ours. It opens up a whole new world for us to expand to this continent.”

Wellman said he was impressed by the quality of the stock he inspected at Easter.

“The athletes here are exceptional,” he said. “From a physical perspective, they’re really nice yearlings, lot in and lot out. There were very few I looked at through the course of the week who were automatic dismissals. They’re by-and-large really well put-together animals and fantastic, loose walkers.”

And the pedigrees matched the physicals, Wellman noted.

“I found it really interesting that 67% of the group winners last year in Australia were sold at auction,” he said. “The breeders are bringing their best-bred stock and their best physicals to market. Unfortunately, we see less of that in the States at the moment. Hopefully we’re in the process of building that back up but down here, every page in the catalogue, there’s something you could sink your teeth into from a pedigree perspective.”

Investors were once again clamouring for the top-of-the-market offers this week, with eight seven-figure colts and one filly going through the ring.

“There is just a massive appetite for well-bred, well-made colts,” Wellman observed. “The stallion market seems to be thriving at present, and with the likes of the Coolmores, Darleys, Newgates, WinStars, Spendthrifts; they’re all clamouring over the big-time colts, because you win a Group 1 with them and you know you’re going to have a significant asset on your hands.”

Wellman said the opportunity to rapidly make back a purchase price on the racecourse is also enticing for his business.

“The prize money in Australia is so great, it doesn’t take much to recoup your investment down here, just on the racing side of the equation,” he said.

So after a week of drinking in all aspects of the Australian industry alongside Waterhouse, Wellman was ready to have a go on a well-bred filly. 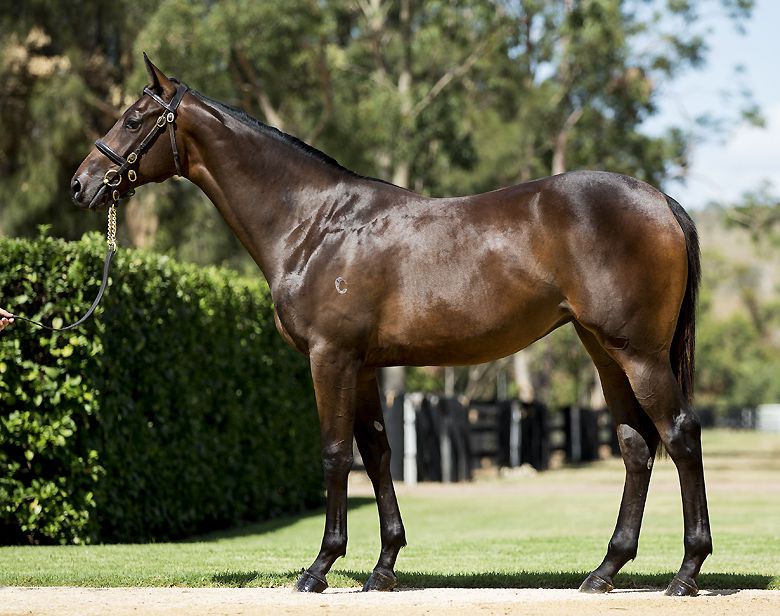 “Quite frankly, I didn’t think I could afford her, because she has an exceptional pedigree and a very fine physical,” he said. “I was monitoring her while she was going through the ring and when the hammer dropped at A$200,000, I was somewhat astonished. In the aftermath we got some really nice attention on the filly from some highly respected operations down here, which gave me plenty of confidence that it was a good move.” Wellman noted the filly was given two thumbs up by Waterhouse, who trained the sire. “Gai looked at all the Pierros here and rated her very highly, so that validated my opinion of her,” he said. “It all just added up. We hope she’ll be the first of many in the years to come as we expand down here.”

Wellman said he didn’t know in the immediate aftermath whether the filly’s ownership group would be largely American or Australian, but he said he hoped to expose some of his current American clients to the Australian scene.

“We really haven’t fleshed out the details of how we’re going to structure our partnerships in Australia, but our initial idea is to expose our American partners to the Australian product,” he explained. “As of right now the simple answer is we’re hoping our U.S.-based partners are intrigued enough by this filly to participate in her and join the partnership, and hopefully in a year’s time they’ll be happy to come down here to see it first-hand. It’s a long way to come, but speaking personally I feel at home here, so I have every confidence our partners will relish the Australian racing experience.”