Eclipse Thoroughbred Partners swooped to acquire Charlie Em on the heels of her close third in a listed stakes at Hannover last November, and the Kheleyf filly provided a return on that investment at the first opportunity. Making her U.S. debut for Paddy Gallagher in Saturday’s Grade 3, $100,500 Senorita Stakes at Hollywood Park, the 9-1 chance drove to the lead in the stretch and held off the late charge of 3-5 favorite Scarlet Strike by a head.

Charlie Em was forwardly placed by Garrett Gomez in the early going, stalking Disko Dasko through fractions of :23 2/5 and :47 on the firm turf. Kyriaki was poised on the outside in third, and moved in tandem with Charlie Em as they accosted the leader at the six-furlong mark in 1:10 4/5.

Leaving the far turn, however, Kyriaki flattened out, while Charlie Em sustained her bid and took command after seven furlongs in 1:22 4/5. Scarlet Strike, who had been biding her time farther back, then arrived on the premises. Although gradually gaining late, the favorite could not quite catch the winner, who stuck her neck out determinedly for the wire. Charlie Em completed the grassy mile in 1:35 and rewarded her supporters with $21.40, $6.20 and $4.60.

“That was a pretty good race for her first time in this country,” Gomez said. “They told me she was a little nervous, and to be patient with her. She broke really well. I uncovered her with a half-mile to go. I had to keep grinding on her, but she kept staying. Today was the first time I was on her.” 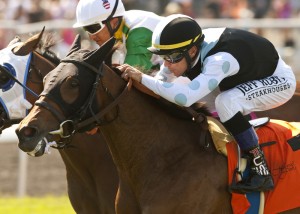 “I tried to get in,” jockey Rafael Bejarano said of his trip aboard Scarlet Strike, “but they kept pushing me out a little bit. From the outside post, I had to go wide. There really wasn’t much I could do.”

“I’m ecstatic about getting her placed in a Grade 3,” Eurton said. “How can I ask for more? She still has some anxiety problems. When she got close to the gate, maybe 100 yards, you can see she wears her feelings right on her sleeve. In time, she’s going to learn to relax.”

Charlie Em’s first career stakes victory nearly tripled her bankroll to $75,678 and advanced her scorecard to 9-4-1-1. Originally trained by Richard Fahey in England, the $11,295 Doncaster October yearling purchase was unplaced in her first three attempts, but improved her position each time. She received class relief in a nursery at Catterick last July, where she broke through with a neck score.

After a runner-up effort in another nursery at Newcastle, Charlie Em was dropped into a claimer at Wolverhampton, and got up in time in a tight finish on the Polytrack. She was claimed out of that August 31 contest for $11,000 and transferred to Brendan Powell. In her first start for new connections, Charlie Em bolted up by 4 1/2 lengths in an October 22 nursery at Pontefract. She went to the Continent to try stakes company in the November 4 Campanologist Cup at Hannover, and just missed in a three-way photo.

“I’ve had her probably since November or December,” Gallagher said. “It took her a little while, but she came around in the last five weeks. She got rid of her winter coat and started acting and training nice. She breezed a couple of times on the (Hollywood Park) grass and seemed to go nice.”

Charlie Em could run next in the June 8 Honeymoon Handicap over 1 1/8 miles on turf, according to Eclipse Thoroughbred Partners President Aron Wellman.