Byrama Dazzles In The Manhattan Beach Stakes At Hollywood Park

Byrama had been knocking at the door in Stakes and Graded Stakes company in recent months and was arguably very unlucky not to have achieved Stakes honors, but got the job done in the most spectacular of style on Saturday afternoon at Hollywood Park when she launched herself off the far bend and made up what appeared to be an insurmountable deficit to capture the $70,000 Manhattan Beach Stakes.

The daughter of Byron, who was plucked from the United Kingdom by Eclipse last summer and carried the torch as the flagship racehorse for the Eclipse stable, has been a remarkable producer for her partners, streaking her way to a 2-2-2 record from 6 starts stateside. The booty she garnered on Saturday pushed her lifetime tally to better than $146,000.

Byrama was odds-on to win the Manhattan Beach on the basis of her superb form, including 2 recent Graded placings, but a sluggish start and having to run against the grain of an incredibly speed favoring turf course made her task all that more difficult. A poised Rafael Bejarano sat chilly, however, and when he summonsed Byrama for her best at the head of the lane, she lengthened her stride, laid down her body and blazed home with a breathtaking turn of foot.

Eclipse President, Aron Wellman remarked, “Byrama is the epitome of a top class racehorse. She loves her job and although she’s gone through a gradual maturation process, she has never disappointed us. Getting her a Stakes win to accompany her various black type was crucial to solidify her residual value and the hope is that she still has her entire future ahead of her and we look forward to many more fine runs at the highest level.

“Simon (Callaghan) and his entire staff, including his loyal assistant, Gorden, have done a tremendous job developing Byrama and they deserve a lot of credit for the success she’s achieved and the future success she’s postured for,” Wellman praised.

“Perhaps the most important thing that emanates from this important victory is that Byrama was the first ever horse offered by Eclipse for the purpose of forming a racing partnership,” Wellman reflected. “When we started Eclipse we made it our well known mission to succeed at the highest level both on and off the racetrack and to be able to be on our way towards achieving that for the wonderful group of partners who put their faith in us and our program from Eclipse’s inception is very gratifying.”

Byrama is scheduled to make her next appearance in the Grade 2, $150,000 San Clemente at Del Mar on July 22nd.

In other Eclipse stable news from the weekend: 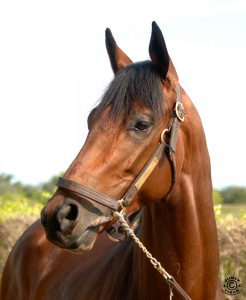 Patrioticandproud gave odds-on stablemate, Prospective, who was last seen participating in the Kentucky Derby, all he could handle until the waning stages of the 9 furlong,$150,000 Victoria Park Stakes at Woodbine Racetrack in Toronto on Sunday.

The useful son of Proud Citizen earned $30,000 for his third consecutive second-place result, which pushes his lifetime total well over the $100,000 plateau.

Running for the second time in 2 weeks, Patriotic broke sharp and assumed command of the race for the first eighth before he was overtaken by an aggressive Holiday Promise, who scampered to the lead going into the Clubhouse turn and distorted the race shape significantly. Eurico DaSilva did a good job of not panicking and allowed Patriotic to settle into a comfortable stride while racing in second, 3-4 lengths off the pace.

At the 3 furlong marker, the longshot Cortville made a short-lived push for thelead on the rail, but it was a non-event, as Patriotic and Prospective simultaneously extinguished Cortville’s half-hearted bid and immediately engulfed both he and the leader, Holiday Promise. At the elbow of the turn, Patriotic and Prospective rocketed off into a private match race with Patriotic on the inside and making a legitimate case to play the role of the upsetter.

At the eighth pole, Patriotic and Prospective were in a ding-dong battle, but Patriotic lugged out from a left-handed crack of the whip of DaSilva, which caused him to bump into Prospective. The contact was self-induced by Patriotic and it worked to his detriment, as it slowed his momentum and actually propelled Prospective to the lead. Patriotic fought bravely to the wire, but simply could not match strides with Prospective, whose class prevailed in the end. The pair were almost 10 lengths ahead of the third-place runner at the wire.

Wellman commented, “We took a shot and darn near pulled off a huge upset in a very expensive race. Patriotic put forth a noble effort, but simply couldn’t match the class of Prospective, who is a very talented colt. Mark (Casse) has done a really admirable training job with this colt and if he continues to improve the way he’s shown in recent months, there’s a Stakes race out there with his name on it. He’s been a very productive horse for the stable and we appreciate the energy Patriotic puts out every time he takes the track in the Eclipse colors.”