Racing on the lead over the dusty turf course at Fair Grounds Race Course & Slots, Amira’s Prince successfully cut back in distance for trainer Bill Mott to nine furlongs following a dominating win in the 1 3/8-mile Mac Diarmida Stakes (gr. IIIT) at Gulfstream Park Feb. 16. He defeated Willcox Inn by half a length.

With Junior Alvarado aboard, the Irish-bred 4-year-old colt by Teofilo was timed in 1:49.76 over firm but patchy grass as the 6-5 choice. Willcox Inn was a clear second in the field of 10 older grass runners, with String King third. Those three dominated the race throughout, with Amira’s Prince breaking from the rail and assuming the early lead. He made all the running while carving dawdling fractions of :25.06, :50.82, :1:15.06.

Coming off the inside for Alvarado as they rounded the final turn and hit the stretch, Amira’s Prince reached the furlong mark in 1:38.64. He held sway under strong urging as Willcox Inn and James Graham tried in vain to get past the leader on the outside.

“He just broke good and I mean he did everything pretty much easy,” Alvarado said. “I didn’t want to fight with him at all so I just let him do his own thing. When the time (came) to run, I asked him and he gave me everything he had.”

The Louisiana-bred String King kept on for third under Richard Eramia, three lengths behind the runner-up. 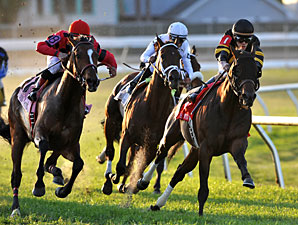 Optimizer, the second choice at 5-2, was attempting to sweep the Fair Grounds handicap grass graded stakes series after a pair of impressive earlier wins. But the son of English Channel did not get away well and was stuck on the outside in seventh as the 121-pound high weight for most of the journey, improving only slightly to fifth at the finish.

A maiden winner with three placings from seven starts in Ireland and Great Britain, Amira’s Prince has been invincible in the United States for partners Wachtel Stable, Eclipse Thoroughbred Partners, and Gary Barber. Arriving late last year, he debuted with a pair of allowance victories at Gulfstream going 11 and 12 furlongs this winter prior to taking the Mac Diarmida by nearly four lengths. He has been favored in all four of his American starts.

“(Distance) was a question because he’s been running a mile and three-eighths, a mile and a half,” noted co-owner Adam Wachtel. “But with his tactical speed we thought we’d be alright cutting back and obviously he can handle it, so obviously we are very pleased.”

Wachtel said the $500,000 Woodford Reserve Turf Classic (gr. IT) at Churchill Downs May 4 is a consideration for Amira’s Prince’s next start.

“I’ll talk to Bill about it,” he said in reference to Mott. “We’ll see how he comes out of it. That is a possibility. We really want to really gear up for the long distance races over the summer but that seems like a logical place if he is doing well.”

Amira’s Prince had not shown himself to be a pacesetter in his earlier U.S. races, though he had been on the lead in some of his races in Ireland.