After A Solid January, Eclipse Springs Into Major Action This Weekend

Eclipse Thoroughbred Partners ran just 4 horses in the month of January, getting the job done once with the ultra-impressive Amira’s Prince in South Florida at Gulfstream Park and seeing another few runners hit the board and the stable’s iron filly, Byrama, run a gallant 4th in the Grade 2 Monrovia Stakes.

After a solid, yet somewhat mellow initial month of the season, the baby blue and black kicks into high gear on both coasts in the first weekend of February with 4 runners at 3 different venues.

The action kicks off on Friday afternoon when the Euro-import, Parisian Prince, a 3 year-old colt, makes his sophomore debut in a $58,000 Allowance race scheduled to be run at 1 mile on the turf at Santa Anita. Hall of Famer, Gary Stevens, who has recently returned to the saddle after a 7 year hiatus, will have the ride for Simon Callaghan. Post time for the Friday opener is 1pm PT. 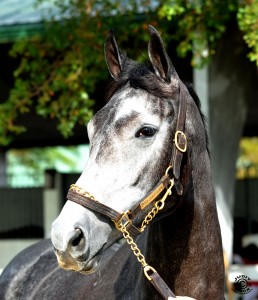 It’ll be a triple-header for the Eclipse squad on Saturday. The initial runner for the stable will come in the form of the promising filly, Silsita, who tackles a wickedly salty group of 3 year-old fillies in a $54,500 turf Allowance race at a mile at Gulfstream Park in South Florida. Hall of Famer, John Velazquez, will sport the Eclipse colors for Todd Pletcher. The lid-lifter at Gulfstream on Saturday has a kickoff time of 12:45pm ET.

The action will then shift to the left coast when Eclipse’s recent Graded Stakes-placed player, Press Baron, takes to the Santa Anita weeds in a $58,000 Allowance race at 9 furlongs. For the second time in as many days, Gary Stevens will don the Eclipse silks, this time for Irishman, Paddy Gallagher. The 7th race on the card at The Great Race Place is set for 3:36pm PT.

The quartet of runners in the 2-day timespan caps off 39 minutes later with another Euro import, Judy In Disguise, heading up to the bay and picturesque Golden Gate Fields where she will take on 6 rivals in a $29,000 Allowance dashing 6 poles on the Tapeta in Berkeley. Dennis Carr gets the mount for Simon Callghan. 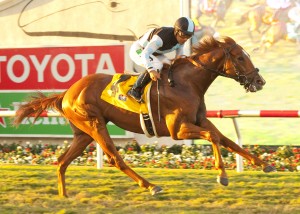 Eclipse President, Aron Wellman, said of the weekend fesitivities, “We slowed things down considerably in December and January by design, as we wanted to gear up our newly-turned 3 year-olds for their 2013 campaigns. We were pleased with the results in January and look forward to seeing February provide our partners with a lot of fun action all across the country. A lot of the horses who will be starting their season this month will use these races as a springboard for what we hope will be a long, productive, high-class campaign. We are live with each of these 4 runners this coming weekend, but our real focus is on posturing our runners for a big 2013.

“Aside from the excitement of having 4 quality runners at 3 different venues in Florida and California, this weekend is pretty special in that we have Gary Stevens riding 2 horses of ours at Santa Anita. I have known Gary since I was a young boy and I consider him a friend off the racetrack and a legend in the saddle. It’s like a renaissance of sorts to see him back in action as he represented a jockey colony during his prime which could truly be characterized as the golden age of racing in Southern California. Gary won some big and important races for me when I first started forming racing partnerships in 2005 and it will be very special and quite possibly emotional, to see him walk out of the jockey’s room with Eclipse colors on. It will be a real treat for me and our partners, not to mention we think we’ve put him on some horses he ought to get a lot of run out of.”

All of the races Eclipse is competing in this weekend can be viewed live on HRTV or at www.xpressbet.com, www.tvg.com or www.twinspires.com.