Turfway: In Lingerie proven on Polytrack coming into Bourbonette Oaks

TURFWAY – In Lingerie proven on Polytrack coming into Bourbonette Oaks.

In a surprising year which two Turfway Park maiden winners, Hansen and Gemologist, are leading Kentucky Derby prospects, it’s apropos that another Turfway maiden winner, In Lingerie, has a chance to shine Saturday in a minor Kentucky Oaks prep, the Grade 3, $100,000 Bourbonette at Turfway on the Vinery Racing Spiral undercard.

Although moving into a stakes race for the first time, In Lingerie is the most likely favorite over a field that includes Grade 3 Miesque winner More Than Love and the stakes-placed Bourbonstreetgirl.

A 3-year-old daughter of Empire Maker, In Lingerie came on the scene Jan. 14 at Turfway, winning a maiden race by 6 1/4 lengths and earning an 80 Beyer Speed Figure. But her stay in Kentucky ended shortly thereafter, following a private purchase by Eclipse Thoroughbred Partners and Gary Barber.

She then went south, joining the barn of trainer Todd Pletcher, and after a series of works, stretched out to a mile and raced on dirt, finishing second to the aptly named Zo Impressive after acting up before the start, unseating John Velazquez. 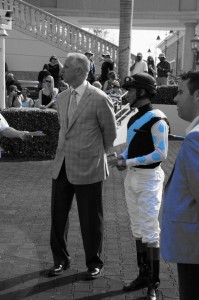 “She came out of there pretty slow, and wasn’t able to secure the forward position we were hoping,” said Aron Wellman, president of Eclipse Thoroughbred Partners. “That said, considering the trip she had and the sensational filly Zo Impressive is, we were pretty happy with In Lingerie persevering and overcoming to be second.”

Wellman said the conditions of the Bourbonette made the race a favorable opportunity for In Lingerie to return to Turfway. Besides the affinity she has already shown for the surface, she gets to stretch out to a two-turn mile, and graded black type is on the line.

Velazquez returns in the irons for Pletcher, who also has an uncoupled second entrant in the race, Dancing Solo, a runner-up at Gulfstream on Feb. 8 on dirt.

More Than Love, coming off a nose defeat when second to Dixie Strike in the Florida Oaks on Feb. 4 at Tampa, adds blinkers and is one of several front-runners in the lineup.

She has been a skilled performer on turf, taking a maiden race at Belmont prior to her Miesque victory and Florida Oaks runner-up finish. She has never raced on Polytrack, the main track surface at Turfway.

John Terranova trains More Than Love, who has been training regularly at Belmont Park since the Florida Oaks. She carries high weight of 124 pounds and jockey Corey Nakatani, spotting her rivals four to six pounds apiece.