After being acquired by Eclipse Thoroughbred Partners last September, Sweet Cat turned in two phenomenal efforts, including a second-place finish in the Grade 3, $150,000 Jessamine Stakes at Keeneland and a third-place performance in the Grade 2, $1 million Breeders’ Cup Juvenile Fillies Turf under the twin spires at Churchill Downs. Those classy results allowed trainer and co-owner Todd Pletcher and Eclipse to set out on an ambitious path of prestigious 2-turn route races on turf and synthetic tracks for Sweet Cat’s sophomore campaign.

Unfortunately, Sweet Cat laid an egg in her 2012 comeback race going 1 1/16-miles on the turf and those lofty plans were derailed and Pletcher and Eclipse President, Aron Wellman, agreed to switch gears with Sweet Cat and revert to turf sprints. Sweet Cat had broken her maiden impressively last summer in a grass dash on the sod at Saratoga and, physique-wise, she had begun to take the shape of her dam’s sire, Carson City, who was a brilliant sprinter, so the cut back to one corner races was a logical option in an effort to get Sweet Cat back on the beam.

As rare as it is for plans to work out when it comes to horse racing, Friday’s game plan unfolded to absolute perfection as Sweet Cat sat a perfect trip right off the pace, engaged the leader coming off the far turn and stormed home with tremendous power to score by 2 lengths. Sweet Cat stopped the clock in smoking time of :55-flat. She covered her final eighth in a spiffy :11 2/5, while garnering $29,400 for the tally, pushing her lifetime earnings to just shy of $200,000.

“Nice,” jockey Javier Castellano said succinctly. “She really laid her body down for me, but at the same time, she did it easy.”

Todd Pletcher, who also retained a 25% interest in Sweet Cat along with his father, JJ, added, “Well, we can forget about that clunker from last month. The race unfolded just the way we had hoped and Sweet Cat performed the way we know she’s capable. It’s pretty clear that 1-turn races are her forte, so we’ll keep her around 1 corner for the time being and search for Stakes spots to add a Stakes win to her multiple Graded placings. Amazingly, as fast as she ran, she came back to the winners’ circle dry as a bone and barely taking a deep breath. We’re very pleased.”

Wellman provided, “This is just what the doctor ordered. Sweet Cat was a different filly today. She was bright and on her toes in the warm-ups and determined every step of the way during the race. We’ll just chalk her comeback race up as needing to shake off the rust. The biggest concern was whether she’d lost her competitive spirit, so it was a relief to see that she’s still got that fire inside of her to go out and kick butt. 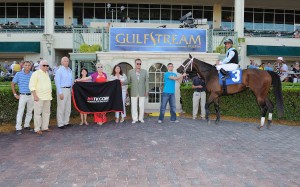 “I’m glad Todd (Pletcher) and I weren’t stubborn about trying Sweet Cat going long again and decided to be proactive by cutting her back in trip” Wellman acknowledged. “She’s an exceptionally powerful turf sprinter and there’s nothing wrong with having that particular specialty, as there are tons of options available for her to add Stakes to her already impressive resume and continue to enhance her residual value. It’s gratifying to get Sweet Cat back into top form and I’m thrilled for our partners who continue to support our program.”

In just a short while since launching the company, Eclipse has proven to be capable of competing at the highest level the sport has to offer. Since its’ launch, Eclipse Thoroughbred Partners has visited the winners’ circle 5 times from 17 starts for a 29% win strike rate. Eclipse runners have been in the money in 11 of 17 outings for a 64.7% in-the-money ratio, including 5 Stakes and Graded Stakes placings. Eclipse runners have tallied $393,337 in purse earnings for an average earning of $23,137 per start.

Additionally, Eclipse has already notched a Graded Stakes win when In Lingerie captured the Grade 3, $100,000 Bourbonette Oaks, stamping her ticket to the Grade 1, $1 million Kentucky Oaks.