Dayton, OH & Del Mar, CA – Eclipse Thoroughbred Partners was formed in late-August of 2011. Two months later, the company won with its’ first ever starter. Five and one-half months later, after knocking on the door in Stakes and Graded Stakes races, including a third-place finish by Sweet Cat in the Grade 2, $1 million Breeders’ Cup Juvenile Fillies Turf, Eclipse has achieved Graded Stakes glory.

On Saturday, March 24th, In Lingerie, who Eclipse owns in partnership with Metro Goldwyn Mayer Co-Chairman and CEO, Gary Barber, toyed with her rivals en route to a jaw-dropping 6-length romp in the Grade 3, $100,000 Bourbonette Oaks at Turfway Park in Florence, Kentucky.

Acquired by Eclipse in a private transaction just 2 months ago off a maiden victory at Turfway, In Lingerie took no prisoners by making every pole a winning one before cat-hopping home 6 lengths to the good of her nearest foe in the Bourbonette. John Velazquez was in the irons for Todd Pletcher, who Eclipse tabbed to take over the conditioning of the daughter of Empire Maker after the deal to acquire her was inked. 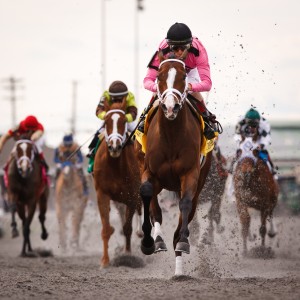 Carrying the distinguished hot pink colors of Gary Barber on the day, In Lingerie became a Graded Stakes winner in just her third lifetime outing. She stopped the clock in 1:38 1/5, which was by far the fastest mile run on the day over Turfway’s man-made surface. Andy Beyer doled out a robust 91 Beyer Speed Figure for the effort. To View the Race Video Click Here

“In Lingerie is a little difficult, especially around the starting gate, but as far as her physical talent is concerned, she’s exceptional,” jockey Velazquez stated. “She made me a little nervous when she didn’t want to go into the gate before the race, but she behaved well once she was in there and even though she hopped slightly coming out, she broke well. From there she did it easy. I never really allowed her to run. It was very impressive.

Asked by the media if he felt In Lingerie was Kentucky Oaks quality Velazquez responded, “Definitely.”

Eclipse formed a partnership to race In Lingerie just 2 months ago. The Graded Stakes victory on her resume, combined with her royal pedigree, makes the sophomore filly worth a pretty penny. By the red-hot sire, Empire Maker, In Lingerie is out of a Grade 2-winning daughter of the legendary Storm Cat. In Lingerie’s second dam is none other than the Champion 2 year-old filly of her generation, Phone Chatter.

Eclipse President, Aron Wellman offered, “We are elated for our partners and all of our supporters to have accomplished Graded Stakes success during the company’s infancy. Eclipse was formed with the intention of acquiring and campaigning horses capable of competing and winning races at the highest level. To have a Breeders’ Cup-placed filly and now a Graded winner and a legitimate Kentucky Oaks prospect certainly validates our program and we are thrilled to be providing such a platform for our racing partners. 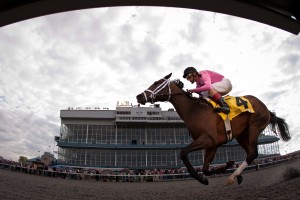 “Our partners have really stepped up to the plate and supported our partnerships,” Wellman acknowledged. “Without our partners’ faith in us and in the product we’ve presented, there’s no way we’d be where we are at such an early stage. Much thanks and appreciation goes out to the horses who have given their all for us, all of our partners, the entire Eclipse staff and our top-notch trainers and jockeys who have executed for us on the racetrack. We’re ecstatic with our current roster of horses and we are excited about continuing to build on a solid initial foundation of success.”

Since its’ launch, Eclipse Thoroughbred Partners has visited the winners’ circle 4 times from 16 starts for a 25% win strike rate. Eclipse runners have been in the money in 10 of 16 outings for a 62.5% in-the-money ratio, including 5 Stakes and Graded Stakes placings. Eclipse runners have tallied $363,937 in purse earnings for an average earning of $22,746 per start.

About Eclipse Thoroughbred Partners: Launched in 2011 and with offices in Dayton, OH, and Del Mar, CA, Eclipse Thoroughbred Partners forms racing partnerships with its’ primary focus on acquiring thoroughbreds that have already run on the racetrack and who Eclipse believes possess “blue sky” potential to make a serious mark at the highest level the sport has to offer. Eclipse was formed to combine years of on-the-track horsemanship with a modern approach to building an ownership experience that blends on-track success with off-the-track hospitality and lifestyle experiences. Since seeing its’ first runner hit the track just 5 ½-months ago, Eclipse Thoroughbred Partners has been represented by runners such as Sweet Cat, who was 3rdin the 2011 Grade II Breeders’ Cup Juvenile Fillies Turf, and In Lingerie, recent winner of the 2012 GradeIII, Bourbonette Oaks at Turfway Park.