Spanish Loveaffair Romps At 30-1 In Pebbles Stakes At Belmont

Eclipse Thoroughbred Partners, Michael Hernon, and Gary Barber’s Spanish Loveaffair  posted her first victory in more than a year Sept. 19, besting a stacked field that included eight stakes winners in the $150,000 Pebbles Stakes for 3-year-old fillies going one mile over the Widener turf at Belmont Park.

The 3-year-old Karakontie   filly trained by Mark Casse entered the Pebbles off a fourth-place finish in the Aug. 21 Lake Placid Stakes (G2T) over a yielding turf at Saratoga Race Course, where she hit the gate at the start, stalked the pace from second and came up empty in the stretch.

Breaking from post 10 under Junior Alvarado Sunday, Spanish Loveaffair rated a close third to the outside of Jordan’s Leo , while Spirit of Bermuda  commanded the field down the backstretch. Nearing the far turn, through a half-mile in :49.25, Spanish Loveaffair inched her way into second and leveled up to even terms with the pacesetter a few strides outside the quarter-pole.

Spirit of Bermuda dug in gamely in upper stretch, but ultimately gave way as Spanish Loveaffair drew off to a 2 1/4-length score in a final time of 1:35.82. Jordan’s Leo finished second, one length ahead of Runaway Rumour  in third.

Spanish Loveaffair earned her second career stakes victory after capturing the Sharp Susan Stakes in August 2020 on firm going at Gulfstream Park. She crossed the wire first in her seasonal bow Feb. 27 in the Herecomesthebride (G3T) over firm footing at the South Florida oval, but was disqualified to fourth. She earned graded stakes black type when she finished second in the Jessamine Stakes (G2T) in October 2020 at Keeneland and the May 29 Regret (G3T) at Churchill Downs. 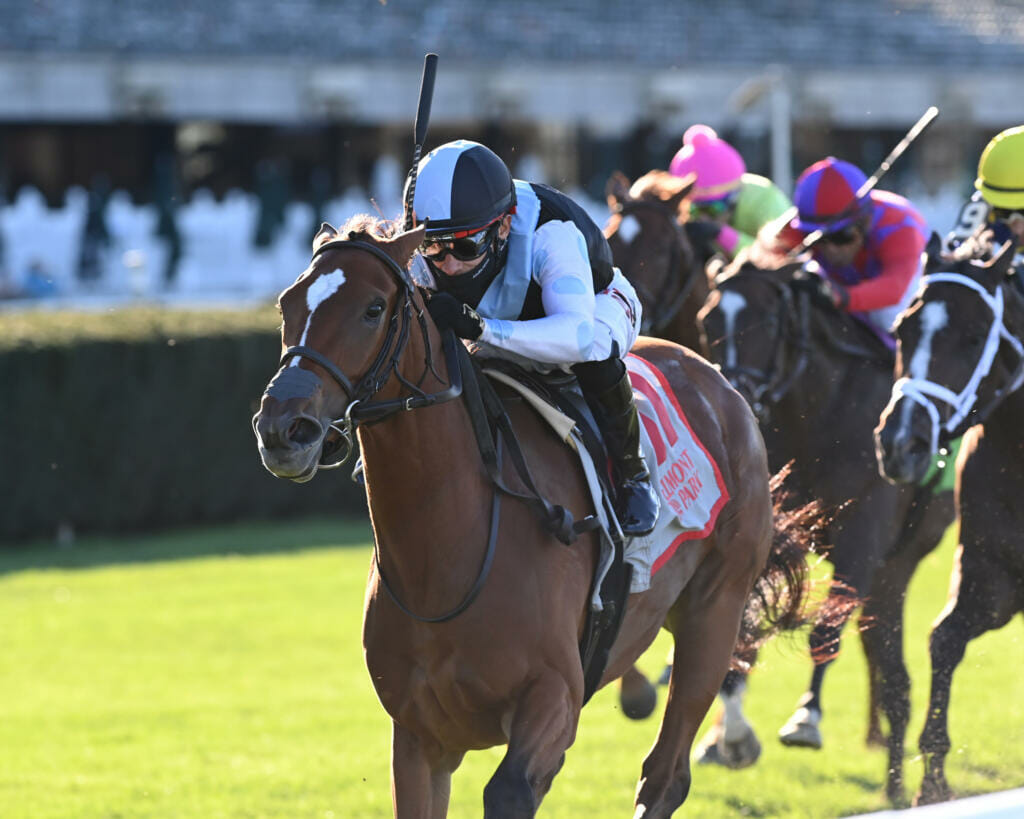 The Pebbles was the first time Spanish Loveaffair had run over firm going since the Herecomesthebride.

“I thought with it being dry that she’d run well,” said Casse assistant Shane Tripp. “She’s got enough speed to put herself in the race, and Junior did a great job riding her. She’s a miler through and through. I’m really proud of her.”

Alvarado said he was confident Spanish Loveaffair could outrun her odds.

“I couldn’t believe the price,” Alvarado said. “I was talking with Shane and I thought we looked sneaky good in here. We weren’t the favorite—I knew that for sure—but on paper she didn’t look like a 30-1 shot.

“She ran great on firm turf at Gulfstream and today she got firm ground and ran very well,” Alvarado continued. “I was trying to hustle out of there because I didn’t have a good post, so I had to try and get some position in the first part of the race. I followed in second and we were going pretty slow, so I wasn’t in a rush at that point. I was taking my time to make sure I had enough horse to finish the race and she responded very well.”

“A little turn back helped her for sure,” Alvarado said. “She’s been running with tough company and she had a couple races where she didn’t run that well, but it was soft turf. I had to hope with a little firmer turf she was going to run much better.”

Spanish Loveaffair enhanced her lifetime earnings to $236,590. Bred in Kentucky by Gainesway Thoroughbreds, she is out of the Unusual Heat mare Spanish Bunny, making her a half sister to grade 1 winner Spanish Queen . She was a $35,000 purchase from the 2019 Keeneland September Yearling Sale, where she was consigned by her breeder.