FLORENCE – A year ago, Aron Wellman watched one on his fillies overwhelm the field in Turfway Park’s Grade III Bourbonette Oaks with sheer brilliance.

On Saturday, another of Wellman’s promising young distaffers had him making a return trip to that winner’s circle on the basis of her fierce grit.

One year after taking the 1-mile Bourbonette with In Lingerie, Wellman and his partners in Eclipse Thoroughbreds scored a title defense when the Todd Pletcher-trained Silsita edged Marathon Lady in a bob at the wire to take the $100,000 test.

While In Lingerie blew her competition away by 6 lengths, Silsita upped the drama quotient when she stalked second behind pace setter Martha’s Moon through a half in :47.56 and hooked up with 31-to-1 long shot Marathon Lady in a prolonged stretch drive.

The two left Grade I winner and 4-to-5 favorite Pure Fun hanging on for third as they matched strides, with Silsita getting up by a nose for her second victory in four career starts.

“To defend our title is pretty special,” said Wellman, whose Eclipse Partners owns Silsita with Camil Torbay. “Her one dirt race didn’t pan out but … she’s run so well on the turf and trained so well on dirt we thought maybe if you blend the two together we would get lucky here on the Polytrack.

“We thought if Pure Fun stubbed her toe, we might be all right.”

Pure Fun was making her first start since winning the Grade I Hollywood Starlet in December and would likely go on to either the Grade I Ashland at Keeneland or Grade III Fantasy Stakes at Oaklawn.

“It looked like she was fighting the track a little bit,” said Kenny McPeek, trainer of Pure Fun. “It’s a step in the right direction.”

In the day’s other stakes, Team Valor’s Crop Report unleashed a monster last-to-first rally to capture the $75,000 Rushaway Stakes and set himself up for a possible start in the Grade I Toyota Blue Grass Stakes at Keeneland. 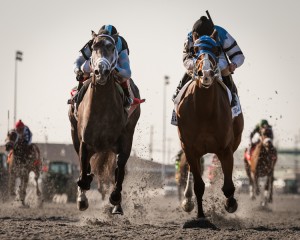 Last year, Eclipse, Pletcher and jockey John Velazquez, who was aboard Silsita, won with In Lingerie. While In Lingerie romped with an easy six-length win, Silsita found herself in a test with her rival to the inside, Marathon Lady, in a head-bobbing duel to the wire.

Silsita, a Florida-bred gray daughter of Macho Uno also part-owned by Tanourin Stable, was the third betting choice at 9-1. Marathon Lady was 31-1.

Pure Fun, the favorite trained by Kenny McPeek, settled mid-pack and embarked on a five-wide rally in the stretch, but struggled to reach the two leaders and finished third.

Silsita, who covered the mile in 1:38.27, was making her first start on synthetic. She won her debut on turf at Calder.

Velazquez kept Silsita close to the pace, tracking Martha’s Moon through early fractions of :24.09 and :47.56. Marathon Lady and Robby Albarado snatched the lead as the field headed into the stretch and the two were neck-and-neck

Silsita tallied 50 Kentucky Oaks points with the win, but her path is yet to be determined. She was a distant fourth in her lone try on dirt at Gulfstream Park in January.

“That surface at Churchill obviously it’s conventional dirt, but for some reason in recent years, turf horses have actually taken quite well to it,” Eclipse Thoroughbred’s Aron Wellman said. “It’s not out of the question, but really we were focused on this goal.”

Pure Fun was making her first start since an eye-catching win in the Grade 1 Hollywood Starlet on Dec. 8. Jockey Garrett Gomez, who flew from California to Kentucky for the race, said the track was a factor in the loss.

“(The track) is real loose and cuppy,” Gomez said. “It probably doesn’t suit her style of racing. Up until the point that I needed her to put her under a little pressure, she was running absolutely tremendous for me. Everything was good until we turned for home. When she came off the turn, she just didn’t want to switch leads.”

McPeek said the Ashland Stakes at Keeneland or Fantasy Stakes at Oaklawn Park would likely be next for Pure Fun.