Back on turf, long-fused Queen Goddess  unfurled an impressive turn of foot the final three-sixteenths of a mile to defeat heavily favored Going to Vegas  by 1 1/2 lengths in the $126,500 Santa Ana Stakes (G3T) March 26 at Santa Anita Park.

Trained by Michael McCarthy and ridden by Victor Espinoza, Queen Goddess ran 1 1/4-miles on a firm turf course in 1:59.72.

Breaking from the bottom of the Santa Anita hillside turf course, longshot Quiet Secretary , as expected, shot to an uncontested early lead with Queen Goddess about six lengths back in second turning up the backside. Queen Goddess, who came off a fifth-place finish in graded company going 1 1/16 miles on dirt at Oaklawn Park Feb. 12, cut the margin to three lengths at the three-furlong pole, and when Espinoza called upon her, she kicked clear turning for home and was never threatened by defending champ Going to Vegas.

Prior to her last couple of races, the 4-year-old daughter of Empire Maker had competed exclusively on turf. 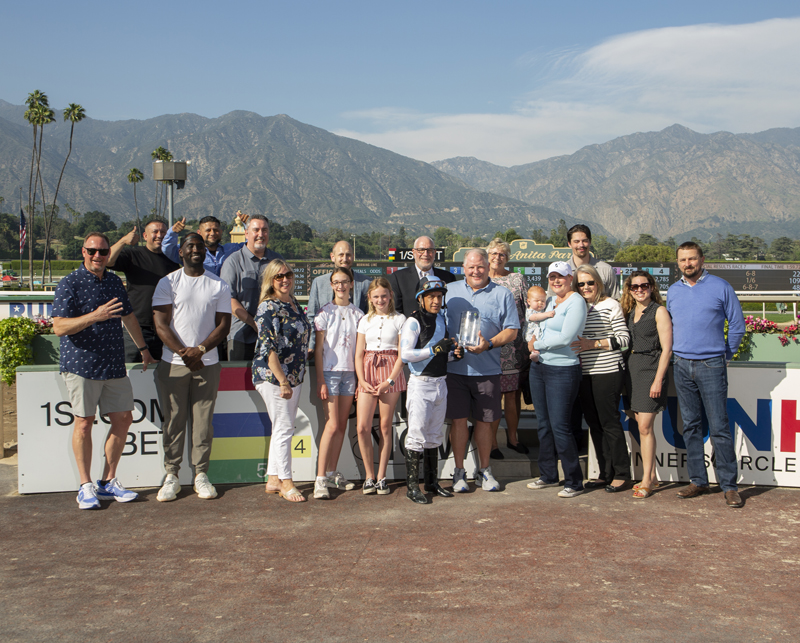 “She’s exceptional at these added furlong races,” said trainer Michael McCarthy. “Her race in the American Oaks (G1) here was very good on a drying-out, wet-fast surface. I just think in these stamina-laden races, she’ll be quite effective all year long in these types of spots.

“We gotta get through the summer first, but you know, you start thinking about a filly that handles the 10 furlongs like this, you’d have to be thinking about it (the Maker’s Mark Breeders’ Cup Filly & Mare Turf (G1T) at Keeneland in November).”

“We were very comfortable,” said Espinoza. “Nice and relaxed, she was doing it so easily. I was getting a little bit excited. I knew that she was going to have plenty until the end, and they were going to have a hard time catching me. Sure enough, she ran really hard.”

Queen Goddess is owned by Eclipse Thoroughbred Partners and TOLO Thoroughbreds and is now a graded stakes winner on both dirt and turf. With the winner’s share of $75,000, she increased her earnings to $385,580 and improved her overall mark to 4-1-1 from eight starts.

Bred in Kentucky by Tolo Thoroughbreds, she is the first foal out of the stakes-placed Lemon Drop Kid mare Royal Story , who hails from the family of grade 1 winner Persistently . Royal Story has an unraced 2-year-old filly by Mendelssohn   named Consort Royal who sold for the equivalent of $277,208 as a yearling to Daithi Harvey/Highland Yard at last year’s Arqana August Yearling Sale from the Hotellerie consignment.