Pinot The Toast Of Flemington

As the Spring Carnival prepares to draw to a close on Saturday, the penultimate major race day at Flemington featured the G1 Kennedy Oaks and a memorable debut success in the Victorian Classic for the first lady of Australian racing, Gai Waterhouse. 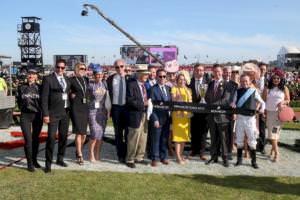 Things didn’t go completely to plan initially for Pinot, who reared as the stalls opened and missed the break. With Rimraam (Aus) (Commands {Aus}) taking the early lead and short-priced favourite Aloisia (NZ) (Azamour {Ire}) tucked in behind her, Baster was forced to to circle the field on Pinot to challenge Aloisia for second, holding that position as opponents lined up wide round the home turn to lay down a challenge.

No fewer than six fillies in the 12-runner field were backing up after running on Saturday in the G2 G H Mumm Wakeful S., including the winner Luvaluva (NZ) (Mastercraftsman {Ire}), who posed a serious threat down the straight but weakened along with Aloisia to allow the Tony McEvoy-trained Bring Me Roses (Aus) (High Chaparral {Ire}) and Hiyaam (Aus) (High Chaparral {Ire}), representing Mick Price, to claim the minor placings.

Baster added, “She’s just a deadest star. I’ve been working for Gai for years but this year she’s just been unbelievable. Adrian has come on board and he does a great job with the horses and all the staff love their horses to death. This filly is only just maturing now and she can only improve.”

Co-trainer Adrian Bott was impressed with the strong staying performance posted by Pinot, who arrived in Victoria as a maiden but has now notched three wins on the bounce, including the G3 Ethereal S. on her previous start on Oct. 21.

He said, “It was such an exciting race and I think we’ve seen a really special filly today. Full credit to Steve–he took his time and took a deep breath and let her work her way around the field into a nice position. From there she just did the rest. She’s a beautiful staying type and I think we saw that towards the end there.”

Bott continued, “It’s very special being part of Gai’s first Oaks and it’s huge credit to the team here and in Sydney.”