Independence Hall to WinStar Upon Conclusion of Career

Independence Hall  , a recent 7 1/4-length winner of the Oct. 30 Hagyard Fayette Stakes (G2) at Keeneland and winner of the 2019 Nashua Stakes (G3) as an undefeated 2-year-old, will stand stud at WinStar Farm upon the conclusion of his racing career, the farm announced Nov. 4. He will stand for a fee of $10,000 and he will participate in WinStar’s Dream Big Program, which offers breeders the opportunity to earn a lifetime breeding right.

Independence Hall is currently being pointed to either the Clark Presented by Norton Healthcare (G1) Nov. 26 at Churchill Downs or the Cigar Mile (G1) at Aqueduct Racetrack on Dec. 4 and his fee is subject to change following his next start.

From the first crop of WinStar stallion Constitution  , the leading third-crop sire of 2021, Independence Hall was an electric 2-year-old. He was undefeated as a juvenile, winning the first two starts of his career by a combined 17 lengths. In his career debut, he won a maiden special weight by 4 3/4 lengths with speed to spare. He jumped straight into graded company in just his second lifetime start, taking the $150,000 Nashua Stakes (G3) in impressive fashion. After stalking the early pace in the one-mile event, Independence Hall simply engulfed his rivals around the far turn and ran up the score in the lane, ultimately winning by 12 1/4 lengths and stopping the clock in 1:34.66.

“Independence Hall’s striking looks combined with his fast figures at 2 make him a great option at this price point.”

In the Fayette, Independence Hall proved uncatchable. Hustled to the early lead by Javier Castellano, Independence Hall set all the pace in the 1 1/8-mile test. He shrugged off a brief challenge from multiple grade 1 winner Code of Honor   at the top of the lane and rolled to the wire to win by daylight, earning a career-best Beyer Speed Figure of 105 in the sensational effort for trainer Michael McCarthy. 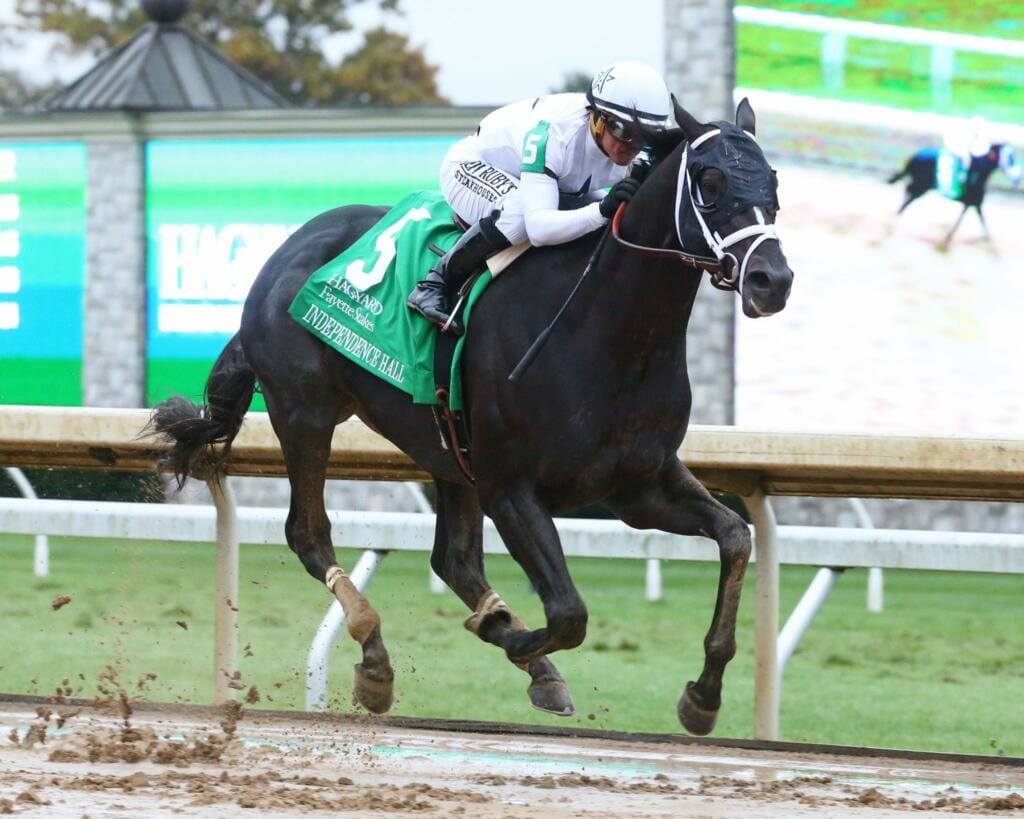 In addition to his impressive stakes victories, Independence Hall finished second to Knicks Go   in the $400,000 Lukas Classic Stakes (G3) at Churchill Downs on Oct. 2 and was third in the $3 million Pegasus World Cup Invitational Stakes (G1) in January.

All told, Independence Hall has won five of 13 career starts thus far, placed in four others, and earned $874,000 for owners Eclipse Thoroughbred Partners, Twin Creeks Racing Stables, WinStar Farm, and Robert and Kathleen Verratti. The dark bay colt, a stakes winner at 2, 3, and 4 from 6 1/2 furlongs to nine furlongs over all track conditions, was bred in Kentucky by Woodford Thoroughbreds.

“When we bought into him after he broke his maiden, he reminded me of his daddy—a great-looking horse with speed. He’s pure athleticism, that’s what I look for,” said Randy Gullatt of Twin Creeks Racing Stables. “We will support him like we did Constitution.”