In Lingerie Tackles Elders in Grade 1, $500,000 Spinster At Keeneland

In Lingerie has had a splendid season for Eclipse Thoroughbred Partners and Gary Barber. Since joining the baby blue and black, the regally-bred daughter of Empire Maker has provided her partners with phenomenal wins in the Grade 3 Bourbonette Oaks and the Grade 2 Black-Eyed Susan. The sleek bay has also garnered valuable placings in Grade 1 fixtures at Saratoga, including a third-place effort in the Coaching Club American Oaks and a valiant second in the Alabama.

On Sunday, In Lingerie makes a return appearance in Kentucky, where this journey all began, when she steps into the land of her elders in the Grade 1, $500,000 Spinster at historic Keeneland Racetrack in Lexington. The Todd Pletcher trainee has drawn post 5 of a whopping 13 fillies set to do battle over 1 1/8-miles on the man-made at Keeneland. In Lingerie’s regular rider, John Velazquez, will be at the helm when the gates spring open at 4:49pm ET.

“In Lingerie has pleased us with her work leading up to the Spinster,” Pletcher confirmed. “There was a period of time in the Spring when she wasn’t showing us what we really wanted to see out of her in the mornings, but that lull appears to be behind her as she’s trained really well for us all summer and into the Fall.

“We’d contemplated running in the Cotillion and also the Beldame, but the fact that the Spinster would be contested over the Polytrack was the deciding factor in choosing this spot as our primary attempt to win a Grade 1 with In Lingerie and possibly earn a berth into a Breeders’ Cup race,” Pletcher reasoned. “She’s run 2 exceptional races over a similar surface at Turfway Park and if she can step up against older fillies and mares and run another good race, we believe we’ve got a very live shot to get the job done.”

Eclipse President, Aron Wellman chimed in when stating, “We couldn’t be any more satisfied with the job Todd (Pletcher) and his crew has done with In Lingerie since we transferred her into his care last January, nor could we be any more proud of the season In Lingerie has put together. Our goal since the Spring was to do everything in our power to win a Grade 1 with her, which would send her value straight through the roof, and while she’s run to solid races in Grade 1’s over the summer, we are really confident that she’s sitting on perhaps the best race of her career going into the Spinster.” 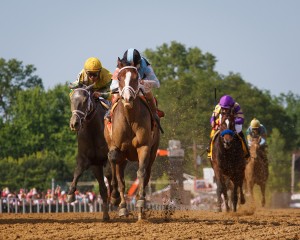 “The Spinster is such a historic and important race, that it’s truly a privilege to have a runner, let alone one of the top choices,” Wellman acknowledged. “In Lingerie has taken us all over the country this year and made us proud at every port. If her Kentucky trip produces a positive result, we’re hopeful she can take us all the way to the left coast and California for a Breeders’ Cup fixture. But, first thing’s first, and the Spinster offers a huge challenge, so our sole focus is on the task at hand. We’re all very excited to see if In Lingerie can escalate her game and conquer the highest honor.”

The Spinster has attracted a deep and large field filled with quality from top to bottom. Much of the race complexion will depend on whether 2 of the fillies entered in the race, Juanita and Summer Soiree, will in fact go postward on Sunday, or opt for alternative races they’re entered in on Saturday. Both Juanita and Summer Soiree are fast fillies who will have a large say in determining the early pace of the Spinster. Either of them defecting would considerably change the race shape and pace scenario.

Pletcher and Wellman agree that while the presence of either Juanita and/or Summer Soiree will have an impact on the pace, In Lingerie is drawn well and tactical enough to allow John Velazquez to place her in contention from the get-go and have her within striking distance once the real running starts.