Gretzky the Great shoots for Summer Stakes glory… and scores!

Trained by Mark Casse for owners Gary Barber and Eclipse Thoroughbred Partners, the son of Nyquist bred by Anderson Farms Ontario survived an inquiry after coming in during mid-stretch against pacesetter and runner-up Ready to Repeat in the one-mile grass engagement for two-year-olds.

It was Ready to Repeat, under Luis Contreras, who broke on top after briefly acting up in the starting gate. Trained by Gail Cox, who co-owns the Kentucky-bred gelding with John Menary, Michael Ambler and Windways Farm, the Victoria Stakes champ led his six rivals through an opening quarter-mile in :24.10 over an E.P. Taylor Turf Course listed as “firm.”

Gretzky the Great, with Kazushi Kimura in the irons, sat second, while Secret Potion was third, and American Monarch positioned in fourth.

Ready to Repeat was still comfortably in front by two lengths after a half in :47.82, as Kimura kept the leader in his sights. Secret Potion and American Monarch continued their tussle behind the front duo, as Dolder Grand began to close ground from sixth.

As the field rounded the turn for home, Kimura roused Gretzky the Great to engage Ready to Repeat, and the bay colt responded with an impressive outside surge, striking front and looking to put away a determined foe.

A half-length on top at the stretch call, Gretzky the Great went on to notch a 3 1/4-length win in a time of 1:34.53. Ready to Repeat finished one length in front of Dolder Grand for second, with American Monarch finishing fourth. 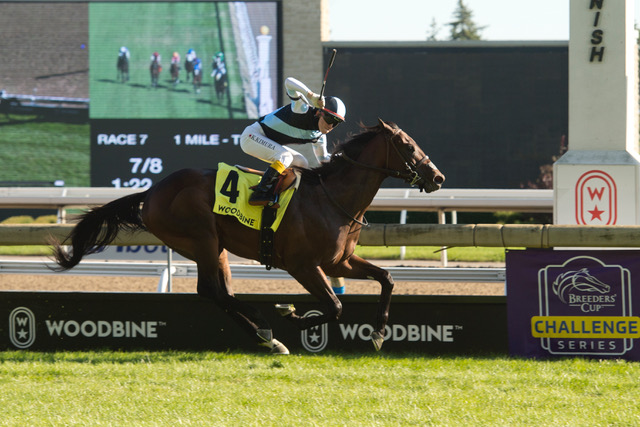 Heat of the Night, Secret Potion and Download rounded out the order of finish.

“He is such an amazing horse,” said Kimura, who recorded his first Grade 1 win. “When I came to the final turn then come through the final stretch, he had a tremendous explosion. He sometimes was a little bit lugging in, but he’s just still a baby.”

The Summer represented the third consecutive winner’s circle trip for Gretzky the Great.

After a second in his first career start on July 12, Gretzky the Great broke his maiden courtesy of a 4 ¼-length win on August 2. That was followed up by a neck nod in the Soaring Free Stakes, a 6 ½-furlong sprint over the E.P. Taylor Turf Course on August 23.

“First time out it was only five furlongs on the (Woodbine Inner) turf, then when he won the first time I was like, ‘Oh, that will be a stakes horse for the future,’” offered Kimura. “And then winning a stakes and now got a Grade 1, he’s such a nice horse.”

The next goal on Gretzky the Great’s stat sheet could be a date in the $1 million Breeders’ Cup Juvenile Turf at Keeneland on November 6.

“He’s a so easy horse – I mean to control,” said Kimura. “If I want to do something, I can do anything.”