Sovereign Award winner and grade 1 captor Gretzky the Great  delivered a gutsy performance in his first race since March to win the CA$143,000 (US$114,265) Greenwood Stakes Presented by Stella Artois Aug. 14 at Woodbine.

Eclipse Thoroughbred Partners and Gary Barber’s Gretzky the Great came ready to fight in his Woodbine return and first start since a fifth-place effort in the March 27 Jeff Ruby Steaks (G3) at Turfway Park. The 3-year-old Nyquist   colt, with jockey Kazushi Kimura aboard for trainer Mark Casse, fought off County Final  and Artie’s Storm  down the long E. P. Taylor stretch to win a thrilling contest.

Gretzky the Great, b, 3/c
Nyquist — Pearl Turn, by Bernardini

“Top of the stretch, I already saw two horses from the outside,” Kimura said. “Actually I said, ‘Oh, he’s not today,’ but he had extra passion. When I asked him so many times, he (kept) coming back and just keeping a head to them. He just had extra passion.” 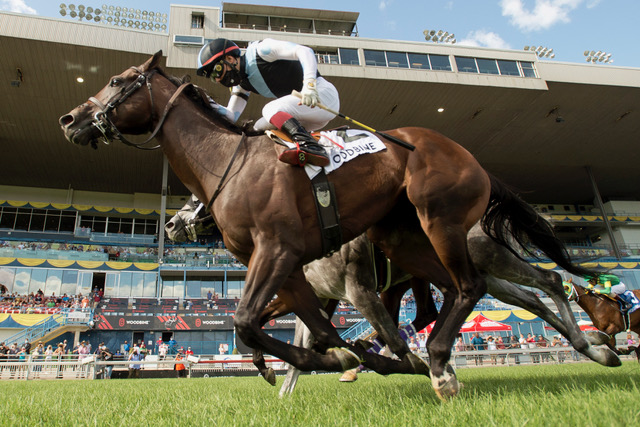 Voted Canada’s 2-year-old champion male of 2020, the bay colt now has a 4-1-1 record from eight starts, with his best victory coming last September on the Woodbine turf in the Summer Stakes (G1T). He has earned $356,870 and is 3-for-3 on the E. P. Taylor turf. Last summer he was second on debut on Woodbine’s inner turf before breaking his maiden next out on the Toronto oval’s Tapeta track.

Anderson Farms Ontario bred Gretzky the Great from the multiple stakes-placed Bernardini mare Pearl Turn , who was bred back to Nyquist for 2022. Pearl Turn is also the dam of Robitaille, an unraced 2-year-old Quality Road   colt who has worked consistently at Casse Training Center since early July. Eclipse Thoroughbred Partners purchased Robitaille for $560,000 from Anderson Farms at the 2020 Fasig-Tipton Kentucky October Yearling Sale. Pearl Turn delivered an Uncle Mo   filly in February.