Feathered will represent the baby blue and black silks of Eclipse Thoroughbred Partners in the $350,000 Hollywood Starlet Stakes – G1 at Los Alamitos in California on Saturday. Coming off a hard fought fourth in the $2,000,000 14 Hands Winery Breeders’ Cup Juvenile Fillies, Feathered, trained by Todd Pletcher, will be ridden by Hall of Fame jockey Mike Smith.

This two-year-old daughter of Indian Charlie was purchased at the Ocala Breeders’ Sale March Sale of Two-Year-Olds in Training. After spending some time at Bridlewood Farm in Ocala, she joined Todd Pletcher’s string in Saratoga. She made her racing debut at that historic racetrack on August 2 in a maiden race finishing second beaten only a head while racing greenly through the stretch. 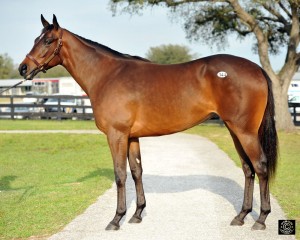 Feathered came back on August 31 at the same location winning by a resounding nine and three-quarter lengths. She indicated she was stakes race ready and made her next appearance in the $500,000 Frizette Stakes – G1 at Belmont Park on October 4. Fifth turning for home, after coming four wide, Feathered put in a solid run to finish third beaten three and one-quarter lengths and thus buying her ticket to the Breeders’ Cup Juvenile Fillies at Santa Anita on November 1. After being involved in some bumping at the start, she stalked the leaders and while fighting gamely to the wire, she finished fourth only beaten a length in her first time going around two turns.