Eclipse Looks to Make the Grade to Start 2015

Patrioticandproud is coming off an outstanding effort in the $250,000 Hollywood Turf Cup Stakes (Grade II) at Del Mar on November 27. Sixth early on, Patrioticandproud rallied between horses in the stretch and was beaten only a neck. This six-year-old son of Proud Citizen has competed in 12 stakes in his 26 start career. He will always be very special to the Eclipse family as he was the first to represent the stable on the racetrack back in October of 2011 at Woodbine. Trained throughout his career by Mark Casse, Patrioticandproud has finished in the top three 17 times including the Las Vegas Marathon (Grade II) at Santa Anita and the Autumn Stakes (Grade II) and Victoria Park Stakes both at Woodbine. He has career earnings of $452,605. 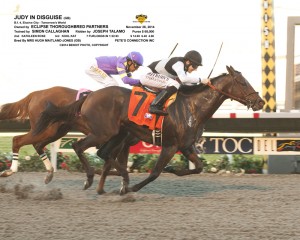 In the San Gabriel, covering one mile and one-eighth over the Santa Anita turf course, Patrioticandproud will be ridden by Drayden Van Dyke. Going as the eighth race, post-time is 4:00 PM PST.

Judy in Disguise came off the bench to win an Allowance race at Del Mar on November 28 after having not raced in twelve months. She will attempt to knock-off her second victory in a row on Sunday in the $200,000 Monrovia Stakes (Grade II) going down the about six and one-half furlong hillside turf course at Santa Anita. Post-time for the Monrovia (eighth race) is 4:00 PM PST.

The weekend for ETP will actually begin on Friday when La Sorella, a four-year-old daughter of Corinthian, runs in an Allowance race at Fair Grounds going five and one-half furlongs over the grass at 4:19 PM CST. Trained by Wayne Catalano, La Sorella will be ridden by Willie Martinez. This filly is a winner and half-sister to Eclipse Thoroughbred Partners Grade I stakes-winner Capo Bastone.

On Sunday, G Five, a three-year-old son of Flashy Bull, will run in the fourth race at Gulfstream Park. Trained by Todd Pletcher, G Five has two wins and a third in only four lifetime starts. He will cover one mile and be ridden by Hall of Fame jockey John Velasquez at 2:07 PM EST.

ETP ended the year with a bang as Bossy proved the boss of her field in an Allowance race at Fair Grounds on December 31. Trained by Wayne Catalano and expertly ridden by Florent Geroux, Bossy exhibited an eye-catching rally in the stretch to win by one-half lengths. She has two wins and two seconds in five lifetime starts.