The baby blue and black silks were carried to victory over the September 20-21 weekend at Gulfstream Park in Florida by two exciting two-year-olds – Sky Limit and G Five.

Sky Limit, a daughter of Sky Mesa, made her debut in a six furlong maiden event racing over a muddy surface on Saturday. Slow out of the gate, Sky Limit was ninth early on before carving out a trip up the inside receiving a lot of muddy kickback in her face. Oftentimes young inexperienced horses will shy away from this but Sky Limit showed guts and determination. She was able to angle to the three path, split rivals and kick by the leader deep in the stretch to win by a length. Jockey Edgard Zayas rode her with confidence and never panicked. 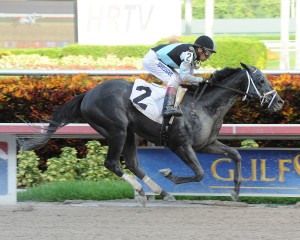 The following day, Sky Limit’s stablemate, G Five, also raced six furlongs over the Gulfstream strip. In his second career start, G Five was outfitted with blinkers for the first time to help his focus. Racing mid-pack along the inside early on, G Five was urged by jockey Edgar Prado to launch his bid at the three-eighths pole, and this two-year-old son of Flashy Bull did, pouring it on his outclassed competition. G Five sprinted clear at the top of the stretch and in a hand ride, galloped home winning by over eight lengths.

Both of these youngsters are trained by Todd Pletcher. Another thing they have in common is that they were purchased by Eclipse Thoroughbred Partners at the 2013 Fasig-Tipton July Yearling Sale. Eclipse has unveiled an impressive group of two-year-olds this year. Bossy, Feathered, G Five and Sky Limit are winners. Curalina finished a good-looking second in her debut at Saratoga and Blame Dixie finished third in her debut also at the always highly competitive Saratoga meet. On the West Coast, Desert Steel set a new track record breaking her maiden at Del Mar.