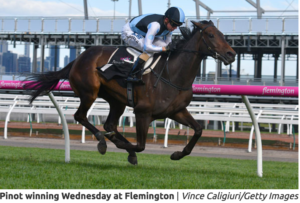 Pinot (Aus) (Pierro {Aus}), the first horse campaigned in Australia by the U.S.-based Eclipse Thoroughbred Partners, overcame some anxious moments with 200m to race in Wednesday’s Kennedy Oaks Trial (1800m) at Melbourne’s Flemington Racecourse to draw off by 3 3/4 lengths and set herself firmly on track for an appearance in A$1-million event (2500m) Nov. 9.

Eclipse President Aron Wellman admits that his trip to the 2016 Inglis Australian Easter Yearling Sale in Sydney was legitimately nothing more than a fact-finding mission, a proverbial dip of the toe into Australian bloodstock market. By his own admission, Wellman was there to do window shopping only–that is until lot 267 from the Coolmore Stud draft–failed to attract the attention Wellman thought she should from the buying public.

“When this filly came into the ring, I thought there was very light action during the bidding process,” Wellman explained. “I was standing with [trainer] Gai [Waterhouse] at the time and she knew I was fond of this filly and the bidding was going slow and she was hovering around the A$150,000 level. I felt at that point that there was too much value in her with her pedigree and the type of physical she presented not to throw our hat into the ring.

He continued, “We jumped in on the bidding and it was hovering around A$190,000 and Gai and I turned to each other and we could tell what each other was feeling and we thought, ‘let’s give it one more hit’ at A$200,000 and sure enough, that’s where the hammer dropped. Gai, being the dynamic person that she is, jumped for joy and gave me a big hug and was thrilled that Eclipse had taken the plunge. It’s been a very interesting and educational journey, but to be in this position now and to think she could be this kind of filly is very gratifying.”