Eclipse Set for Saturday Double-Header and 1 Runner On Sunday

The baby blue and black silks of Eclipse Thoroughbred Partners will be represented by two fillies, Practising and Bee Brave, at Santa Anita this weekend and by Passing Pfast at Delaware Park. 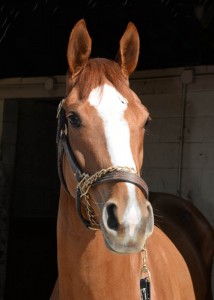 At Santa Anita Saturday, Practising returns to action going one mile on the grass in the fifth race at 3:00 PM local time. Practising, a three-year-old daughter of Rail Link (GB) began her racing career in England finishing second in her first two starts. She was purchased by Eclipse in the summer of 2013 and placed under the care of Patrick Gallagher in California. The transition took some time and Practising did not appear in the entries until January 18 of this year. She reappeared with a bang coming from well back to sweep by several in the stretch at Santa Anita breaking her maiden by a length. Practising was only beaten five lengths in the $150,000 Providencia S.-G3 last out and looks to be well placed in this allowance test. Breaking from the far outside, she will be ridden by Victor Espinoza who, of course, recently won the Kentucky Derby-G1 and Preakness S. – G1 on California Chrome.

Bee Brave runs Sunday in the ninth race at Santa Anita. This is an allowance race going one mile and one-eighth on the grass at 5:00 PM local time. Hall of Fame jockey Mike Smith will be on her back. Bee Brave was purchased by ETP soon after she won her debut in Scotland in August of 2012. Following a series of minor setbacks, and an excellent training job by Simon Callaghan, this four-year-old daughter of Rail Link (GB) showed up in an allowance race at Santa Anita on January 18 of this year. After trailing the field the opening six furlongs, Bee Brave stormed home passing all to win by over a length. She has since finished fourth beaten just four lengths in the $75,000 American Beauty S. again rallying from the back of the pack. We believe Bee Brave will relish the one mile and one-eighth over the grass Sunday.