Matterhorn, a recent purchase by Eclipse Thoroughbred Partners, will represent the baby blue and black silks in the 140th running of the $2,000,000 The Belmont Stakes – G1 on Saturday, June 7, at “the Big Sandy.” Matterhorn will, of course, face the winner of the Kentucky Derby – G1 and Preakness S. – G1, California Chrome, as that colt attempts to be the twelfth Triple Crown winner. Matterhorn is a three-year-old colt by Tapit and is trained by Todd Pletcher. He won first time out in November defeating Tonalist, the third choice in Saturday’s race by four lengths. In his last start, his stakes debut, Matterhorn finished fourth in the $200,000 Peter Pan S. – G2 at Belmont Park. He trains and acts like a colt that will run all day long and his trainer and we believe Matterhorn will thrive over the mile and one-half distance of the Belmont. Joe Bravo will ride. This stakes will run as the 11th race and post time is 6:52 EST. Coverage begins on NBC at 4:30 EST.

Capo Bastone runs Saturday in The Metropolitan – G1. This is a handicap stakes with a $1,250,000 purse. Capo Bastone was the winner of the King’s Bishop – G1 at Saratoga last August. He came from the back in a thrilling stretch run to win that seven furlong stakes indicating he’ll have no problem with the one turn mile. Along with his victory in the King’s Bishop, Capo Bastone finished second in the Derby Trial – G3 and third in both the Breeders’ Cup Juvenile – G1 and the FrontRunner – G1. This son of Street Boss has had twelve starts in his career and competed in ten graded stakes races. 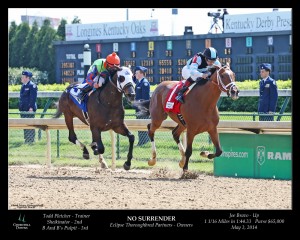 Capo Bastone, trained by future Hall of Famer Todd Pletcher, will be ridden by Victor Espinoza, who later in the day will ride California Chrome as he tries to complete the Triple Crown.

The Metropolitan Handicap will run as the ninth race at 4:48 EST.

The day For ETP will actually begin with No Surrender running in the $150,000 Easy Goer Stakes. This will be the second race on Belmont Day at 12:07 EST going a distance of one mile and one-sixteenth. This three-year-old son of Into Mischief was purchased by Eclipse Thoroughbred Partners soon after he broke his maiden at Hawthorne Park in Chicago in late March. He came right back jumping up in class in a strong Allowance race at Churchill Downs on Kentucky Derby Day. No Surrender showed great courage battling with another colt from the start to the wire while pinned down on the inside winning by a half-length. Jockey Joe Bravo will again be the rider Saturday. While this is another jump up in class, this colt showed the ability, class and courage at Churchill needed to take on this stakes opportunity. There is no surrender in No Surrender.