The baby blue and black silks of Eclipse Thoroughbred Partners were represented with honor on Sunday, July 27, over the hallowed grounds of Del Mar and Saratoga. At Del Mar, Desert Steel, in her third career start, obliterated the track record covering five furlongs over the Polytrack surface in 56.76 – 3/5ths of a second faster than the previous track record. Ridden with confidence by Tyler Baze, this two-year old filly by Desert Code, finished 5 1/4 lengths ahead of the field under a hand ride. She is trained by Simon Callaghan.

Though Desert Steel finished second and fourth in her first two starts over dirt, Sunday’s effort showed synthetic and ultimately turf will definitely be where she shines. While the Grade 1 Del Mar Debutante will be kept under consideration, Desert Steel will more likely make her next start in the $150,000 Generous Portion Stakes restricted to Cal-Bred fillies on August 27th. 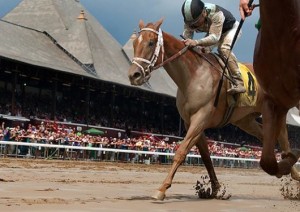 At Saratoga, Curalina made her racing debut finishing second over a muddy track. This two-year-old daughter of Curlin, did not have a smooth journey being bumped early on as well as receiving a good deal of muddy kickback in her face. She showed good courage, though, finishing second by a diminishing length behind a race-experienced filly. Curalina, trained by Todd Pletcher and ridden by Joel Rosario, was six lengths clear of the rest.

Both of these fillies appear to have nothing but blue sky ahead of them!