Crown Winds Down With Fillies to Remember

Now that the 2022 Triple Crown has been safely put to bed, with the names of Rich Strike , Early Voting , and Mo Donegal  etched firmly into history, let’s take a look at the messages left behind. First up—attendance.

By the time the dust had settled, and Golden Glider  trotted home last of eight in New York, there had been eight stout colts who ran in two of the three legs of the Triple Crown, but of the 64 horses who earned qualifying points for the 2022 Kentucky Derby, exactly none of them ran in all three Triple Crown events.

Draw any conclusion, except recognize this: The Triple Crown, as a series, is no longer competitive. It is made up of what can be three competitive races, depending on a familiar list of variables. However, as a meaningful test of a generation’s best young athletes, asking for compression of top efforts into a tightly bound calendar period, the Crown has become as archaic as the four-mile heats of the 19th century.

There is a vocal cohort that contends the purpose of the Triple Crown is to get a Triple Crown winner. Short of that, disappointment reigns. This is a limiting notion, based on lightning strikes that come along with agonizing unpredictability.

There also is put forth the novel idea that the Triple Crown is a unifying influence, bringing horseplayers, fans, and participants together in a burst of springtime excitement. The reality is not quite so benign, since each of the races is owned by a large gaming company with its own betting platform. The competition among the boardrooms of CDI, The Stronach Group, and the New York Racing Association rival anything out there on the racetrack.

Beginning in 2023, there won’t even be the cosmetically unifying effect of all three races aired on the same television network. Fox takes over the Belmont rights next year, while NBC retains the Derby and Preakness. Part of NBC’s coverage of this year’s Belmont included a melancholy stroll through two decades of NBC’s Triple Crown ups and downs, complete with the comforting sound of Tom Hammond’s narration. Then it was back to hosts Mike Tirico, Randy Moss, and Jerry Bailey—not at Belmont Park, though, as has been the uninterrupted tradition, but in a Manhattan studio. 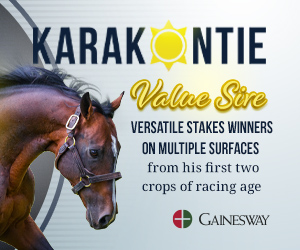 For us viewers, the arm’s length treatment was disorienting. I worried that hockey highlights might break out at any minute, but the message of “Adios, Belmont!” was clear. As for Fox, there is no doubt the network will put its own stamp on the Belmont Stakes, just as it has on its coverage of the U.S. Open golf championship, which airs this coming week from Brookline, Mass. The Double Crown on NBC will have its own narrative, which could very well feature a new date for the Preakness Stakes at some point to encourage a more competitive field. NBC will no longer have any stake in the prospect of a Triple Crown winner.

If nothing else, the 2022 Triple Crown has whetted the appetite for more from the 3-year-olds emerging as the key players from the first half of the year. They are an encouraging, entertaining bunch. Rich Strike deserves another chance in a shorter race than 12 furlongs, with a guarantee of a half-mile split of :46 or less. Mo Donegal has an old-school grit about him that keeps him coming. Stablemates Early Voting and Zandon  will have Chad Brown shuffling the cards all summer, along with the barn’s unbeaten glamour boy, Jack Christopher . It should be fun.

The real saviors of the season, though, have been the fillies. Secret Oath  and Nest  parlayed their 1-2 finish in the Longines Kentucky Oaks (G1) to hit the board in, respectively, the Preakness and the Belmont Stakes. Theirs could end up the most memorable rivalry to emerge from the crop of 2019.

In her attempt to become only the fourth filly to win the Belmont in its 154-year history, Nest’s second was especially noble. She had a funky start, then was pinched back before she could recover, after which she and Jose Ortiz saved all possible ground along the rail. Mo Donegal, her Todd Pletcher stablemate, was just to her outside, which allowed the colt to make first run at leader We the People  on the bend into the stretch. Rather than finding a seam to pounce inside, Ortiz had to pump the breaks and angle the filly into the clear, and by that time Mo Donegal was in full flight and heading home.

“That stumble at the start gets worse every time I watch it, and then there was the agony of trying to get out around the far turn,” said Aron Wellman, whose Eclipse Thoroughbred Partners owns Nest along with Michael House and Mike Repole. “When you run what was arguably the best horse in any race and don’t win, it’s tough enough. But when you’re going for a classic, the feeling is amplified.”

Ortiz geared down in the final yards as his brother, Irad, posted the three-length victory aboard Mo Donegal.

“You try to maintain some level of composure, but I’ll admit I wore my heart on my sleeve,” Wellman said.

With the Central Bank Ashland Stakes (G1) under her belt in 2022, Nest has given the Eclipse group some comfort after the loss in March of their fine 4-year-old filly Con Lima. The daughter of Belmont Stakes runner-up Commissioner  won the 2022 Saratoga Oaks (G3T) and Wonder Again Stakes (G3T). In March, she fractured a leg in her stall at WinStar Farm in Kentucky, where she was preparing for a return to competition this year with Pletcher. A different configuration of Eclipse partners owned Con Lima, but there was some overlap with the Nest group.

“Her loss was felt throughout the organization, not only in the actual ownership group,” Wellman said. “She was a filly with a great following, and a future to match. You only hope to find a filly to follow in her shoes.”

“And she could have made history on Saturday had she not fallen on her face at the start,” Wellman said. “But we’re still immensely proud of her.”