Sweet Cat ran her race yesterday in the $85,000 Thirty Flags Stakes, but was simply second best behind Jazzy Idea, who absolutely freaked on the soft going.

Even though Sweet Cat had run on rain softened turf courses in the past, the surface she was asked to run over yesterday was significantly softer than anything she’d ever seen, either at Keeneland or at Churchill.

Sweet Cat broke sharp under Javier Castellano and ding-donged for the lead with Softly Lit through the first quarter in a brisk :22 and change, which was very fast considering the conditions. Castellano then wisely opted to defer any further pace duel and subtly eased Sweet Cat into a stalking position. At the head of the lane, after participating through the dirty work, it was clear Sweet Cat was laboring over the ground, but she put her head down and dug in gamely to take the lead at the eighth pole.

No sooner did she assume command did Jazzy Idea swoop into contention and whisk by Sweet Cat, who although trying hard, was unquestionably finding the conditions challenging. While Jazzy Idea stormed home, Sweet Cat kept to her task and checked in a clear second, earning another Stakes placing to add to her resume and $17,000 to her bankroll, which has now gone well beyond the $200,000 plateau. Beyer doled out an 80 for her performance, which is solid considering the conditions. 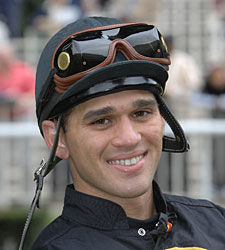 “Man, it was really, really soft out there,” Castellano reported. “Sweet Cat was the only filly who was in the race from start to finish and she just couldn’t hold the winner off. Compared to how she felt at Gulfstream on a firm course, I think she definitely was compromised today. She’s such a nice, classy filly. We’ll have our big day with her.”

Todd Pletcher added, “Undoubtedly, the turf was softer than she prefers. All in all, it was a solid effort and we certainly can’t hold it against her. We’ll regroup and look to identify a similar spot in the next 4-6 weeks.”

Eclipse President, Aron Wellman offered, “Hats off to the winner, Jazzy Idea. She ran a tremendous race. It was unfortunate that the turf came up the way it did, but we had no choice but to play the hand we were dealt and I think Sweet Cat put forth another determined effort. We know her forte and we’ll stick to that strategy through the spring with the main objective to land her a Stakes win to complement her impressive Graded and Stakes-placings.”