Independence Hall: A Son of Constitution at WinStar

As Tapit‘s list of Grade I winners quickly approaches 30 constituents, his sons are now proving their worth in the stud barn. Constitution leads the charge of Tapit sons at stud with an $85,000 fee. The WinStar sire concluded 2021 with a fifth worldwide Group 1/Grade I winner in Cigar Mile H. victor Americanrevolution and his 20th black-type winner in GII Santa Anita Mathis Mile S. winner Law Professor.

While WinStar Farm hopes that Constitution, whose first crop was foaled in 2017, could one day become a foundation sire at WinStar, this year they checked off the next goal for their promising stallion by adding one of his sons to their stallion roster.

Independence Hall, a graded stakes-winning member of Constitution‘s first crop along with MGISW Tiz the Law, will stand alongside his sire this year for a fee of $10,000.

“We’re super excited to have Independence Hall came home to WinStar and begin his stud career,” said WinStar’s director of bloodstock Liam O’Rourke. “We’ve had a great history at WinStar over the past 21 years and Constitution really represents the next generation of what WinStar is going to be. He’s had such an electric start and with what he has coming down the pipeline, we’re very excited and very bullish on his future. [Reaching] the next step of having one of his sons retire to WinStar is very rewarding.”

Bred by Woodford Thoroughbreds, Independence Hall was an easy debut winner for Robert and Kathleen Verratti and trainer Mike Trombetta. Eclipse Thoroughbred Partners and Twin Creeks Racing Stables joined in the ownership before his next start, a stunning 12 1/4-length score in the 2019 GIII Nashua S. in record time.

“He came on our radar very early,” O’Rourke said. “After his first start, when he came back in the Nashua to run a 101 Beyer speed figure–the fastest 2-year-old performance of the year–we started to realize that he was going to be a very special horse.”

The dark bay colt remained undefeated in his sophomore debut in the Jerome S. and was then runner-up in the GIII Sam F. Davis S. After an unplaced finish in his next start, he was given time off and returned to the starting gate at the end of his 3-year-old season under the care of trainer Michael McCarthy.

At four, Independence Hall was competitive against top company with WinStar joining his partnership at the beginning of the season. He ran third to future GI Breeders’ Cup Classic winner Knicks Go (Paynter) in the GI Pegasus World Cup Invitational S., placed second to the same rival later in the GIII Lukas Classic S. and then earned a final career victory in his next start in the GII Hagyard Fayette S.

“He held form with [Knicks Go] through most of the year and the season was culminated by what was I think one of the talking performances of the Keeneland meet when he came out and won the Fayette S.,” O’Rourke recalled. “He beat some outstanding horses in that race and really showed what a brilliant horse he was.”

Independence Hall retired with earnings of almost $900,000, running in the money in six graded starts with three stakes wins to his credit. 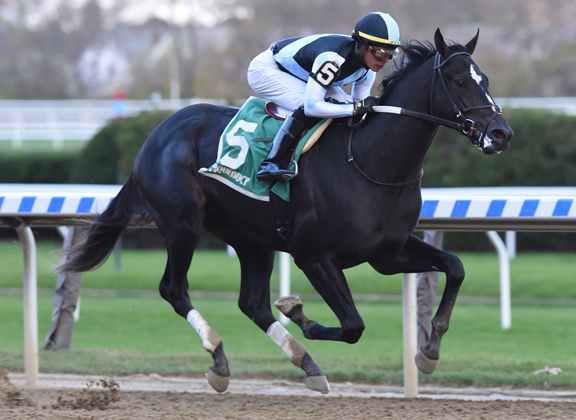 “I think he was a really great racehorse because of that high cruising speed,” O’Rourke explained. “We love that 2-year-old form, that brilliance, and when they can come back and be an elite older horse and knock heads with the best of the best in the country, that’s something that we find really strong.”

O’Rourke said that the new stallion’s physical helps explain the high cruising speed he was able to display on the track.

“Physically, he’s a very impressive horse. He’s a big, beautiful, smooth walker. He’s balanced, but he’s masculine. He has that size, scope and frame that I think Constitution has been able to produce and he put it all together in the way he could get over the ground.”

O’Rourke explained that while Independence Hall has been popular with breeders since arriving at WinStar, he already has a solid support system built in with a large syndicate group that includes Woodford Thoroughbreds, Twin Creeks, Kathleen and Robert Verratti, Eclipse Thoroughbreds, China Horse Club and Machmer Hall.

“It’s really a ‘who’s who’ of syndicate members,” O’Rourke said. “Along with that, we offered Independence Hall in our Dream Big program, which virtually sold out overnight, so we have some really good folks supporting the horse and he will have some really nice mares in those first couple of years.”

“Independence Hall proved that he was a special horse as a 2-year-old and he proved it again as an older horse,” O’Rourke said. “He has the pedigree and the looks and I think we priced him to where he’s very attractive to breeders. We’ve had a huge response to him so far and it’s so rewarding to have a son of one of our sires come home and join our stallion roster.”