Thanksgiving is a popular long weekend of racing across the United States. The baby blue and black silks of Eclipse Thoroughbred Partners will play a prominent role at Del Mar in Southern California. Patrioticandproud will run Thursday, Thanksgiving Day, in the $250,000 Hollywood Turf Cup (Grade II). Judy in Disguise (GB) makes her return to action Friday at Del Mar in an Allowance race. On Saturday, Belle Et Bete (IRE) will take part in the $150,000 Jimmy Durante Stakes (Grade III) and Longstocking will make her career debut in a Maiden Special Weight test.

Patrioticandproud made ETP very proud finishing third in the $200,000 Las Vegas Marathon Stakes (Grade II) at Santa Anita on Breeders’ Cup Weekend. This five-year-old son of Proud Citizen has competed in 11 stakes during his 25 start career. Patrioticandproud will always be very special to the Eclipse family as he was the first to represent the stable on the racetrack back in August of 2011 at Saratoga. This horse loves a distance of ground and he will get that Thursday – one and one-half miles over the Del Mar turf course. Trained throughout his career for Eclipse by Mark Casse, Patrioticandproud has finished in the top three 16 times including the Autumn Stakes (Grade II) and Victoria Park Stakes both at Woodbine. He has career earnings of $402,605. Corey Nakatani will ride and the Hollywood Turf Cup will go off as the seventh race at 2:00 PM PST.

Judy in Disguise (GB) was scheduled to make her 2014 debut in the $100,000 Ken Maddy Stakes (Grade II) at Santa Anita on Breeders’ Cup Day November 1. However, rain hit the area Friday night and when her race was taken off the grass, the decision was made to wait for another day. Judy in Disguise (GB) will run Friday in an Allowance race going seven furlongs over the all weather surface at Del Mar. Trained by Simon Callaghan, this four-year-old daughter of Elusive City will be ridden by Joe Talamo. Judy in Disguise (GB) won an Allowance race in her debut for ETP back in February 2013. She has run in nine stakes during her fifteen race career winning the Sweet Life Stakes (Santa Anita) and finishing second in the Playa Del Rey Stakes (Hollywood Park) and Manhattan Beach Stakes (Santa Anita). She also finished third in the Beaumont Stakes (Grade II) (Keeneland) and San Clemente Handicap (Grade II) (Del Mar). Post-time for the sixth race Friday will be 3:00 PM PST. 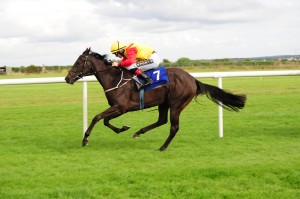 Belle Et Bete (IRE) makes her ETP debut Saturday Where the Surf Meets the Turf in the $150,000 Jimmy Durante Stakes (Grade III). This stakes will cover one mile over the Del Mar turf course. This two-year-old daughter of Big Bad Bob (IRE) impressively won two in a row in Ireland before being purchased by Eclipse Thoroughbred Partners in August. Soon flown to California with hopes of competing in the Breeders’ Cup Juvenile Fillies Turf race, Belle Et Bete (IRE) came down with a slight temperature and a new plan was put in place. Under the direction of Paddy Gallagher, she has settled into her new routine very well and is now poised for action. Belle Et Bete (IRE) will be ridden by Alex Solis. The Jimmy Durante Stakes will go as the sixth race and post time is 3:00 PM PST.

Longstocking, a two-year-old daughter of Into Mischief, will make her much anticipated racing debut at Del Mar Saturday in the ninth race covering six and one-half furlongs over the all weather surface at 4:30 PM PST. Longstocking was purchased at the 2013 Fasig-Tipton Kentucky July Yearlings Sale. She then ventured to Aiken, SC and spent the fall and winter there learning her lessons. She joined Michael McCarthy’s stable in Southern California in early July. Longstocking’s breezes leading up to her first career start have caught the eyes of many and we are anxious to see her in action. She will be ridden by Hall of Fame jockey Mike Smth.