Eclipse Thoroughbred Partners has teamed up with Metro-Goldwyn-Mayer Co-Chairman and CEO, Gary Barber, to acquire the impressive debut winner, In Lingerie.

In Lingerie, a daughter of the ultra-hot sire, Empire Maker, is out of the Grade 2 (Nassau County S.) winning Storm Cat mare, Cat Chat. Cat Chat was sold as a yearling for $1.2 million. In Lingerie’s second dam is the Champion 2 year-old filly of her generation, Phone Chatter. Phone Chatter is a multiple Grade 1 winner of the Breeders’ Cup Juvenile Fillies and the Las Virgenes Stakes.

Despite stumbling leaving the gate, In Lingerie dazzled in her debut at Turfway Park last weekend, besting her opposition by a widening 6 Â¼-lengths going 6 furlongs.

Eclipse Thoroughbred Partners and Barber have turned the filly over to Todd Pletcher, where she joined his main string at Palm Meadows today. 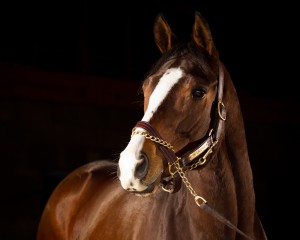 “We are thrilled to have been able to acquire such a highly promising filly for our growing stable,” Eclipse President Aron Wellman said. “Gary (Barber) is a true sportsman and we very much look forward to campaigning In Lingerie with him.

“In Lingerie is a tremendous mover and physically she’s an absolute knockout. Her pedigree is legit and suggests that she should thrive at route distances. We’ll allow Todd (Pletcher) to wrap his arms her and get this filly into his program,” Wellman added. “There’s no rush. She’s got Graded quality written all over her and we’ll take our time to do what’s in the filly’s best interest so as to maximize her potential. The entire Lyster family did a superb job of developing In Lingerie and they have been pure class to deal with throughout the process.”

Eclipse Thoroughbred Partners is off to a fast start since the company launched late last August. The company has 2 wins from just 8 starts, including a scintillating victory by She Spirit di Su, a European import who splashed onto the American Turf scene last week at Santa Anita. The stable also has 4 black type placings across North America from Toronto, to Kentucky to California, including a third-place finish in the Grade 2, $1 million Breeders’ Cup Juvenile Fillies Turf with Sweet Cat.