The fillies reigned for Eclipse Thoroughbred Partners this past weekend as the baby blue and black silks were carried to the winner’s circle at Del Mar in California and Saratoga in New York. The California-based filly, Desert Steel, won her Allowance race at the track best known as “Where the Turf Meets the Surf” on Friday. Tango Time was a convincing winner in her Allowance test at Saratoga on Travers Day. One of the top three-year-old turf fillies in the country, our own Feathered, also was a very impressive winner in her Allowance contest at Saratoga on Sunday.

Desert Steel (left) showed promise at two, finishing second in her debut before setting a track record in her maiden-breaking victory at Del Mar last July. Given time off over the winter, it took a while for Desert Steel to put it all together this year. She has now. Aron Wellman, President of Eclipse Thoroughbred Partners, sums it up best when he says, “After a frustrating spring, Desert Steel has been brilliant this summer, reeling off a 3rd and a pair of wins at the current Del Mar stand.” After capturing a state-bred Allowance going five furlongs on the grass on August 12 by three and one-quarter lengths, Desert Steel came right back on Friday to win an open Allowance by three and three-quarter lengths. Flavien Prat guided this three-year-old daughter of Desert Code for trainer Simon Callaghan. While between horses in the turn, Desert Steel showed good courage surging to the lead at the top of the stretch and was not threatened during the race to the wire.

This is Desert Steel’s third victory in eight career starts and she now has earnings of $178,924. Being a California-bred, one would have to believe stakes engagements are in this filly’s future.

We thought Tango Time (below) was sitting on a big effort and she proved us correct at Saratoga on Saturday. In only her second stateside appearance, this four-year-old daughter of Danehill Dancer, showed grit and determination during the stretch run. As Aron commented, “Stuck behind a wall of fillies at the 1/8 pole, Tango Time got bold and knifed her way through an ever so slight opening, propelling herself to the lead in the blink of an eye as if she was shot out of a cannon.” Tango Time surged to the wire scoring a two and one-quarter length victory. 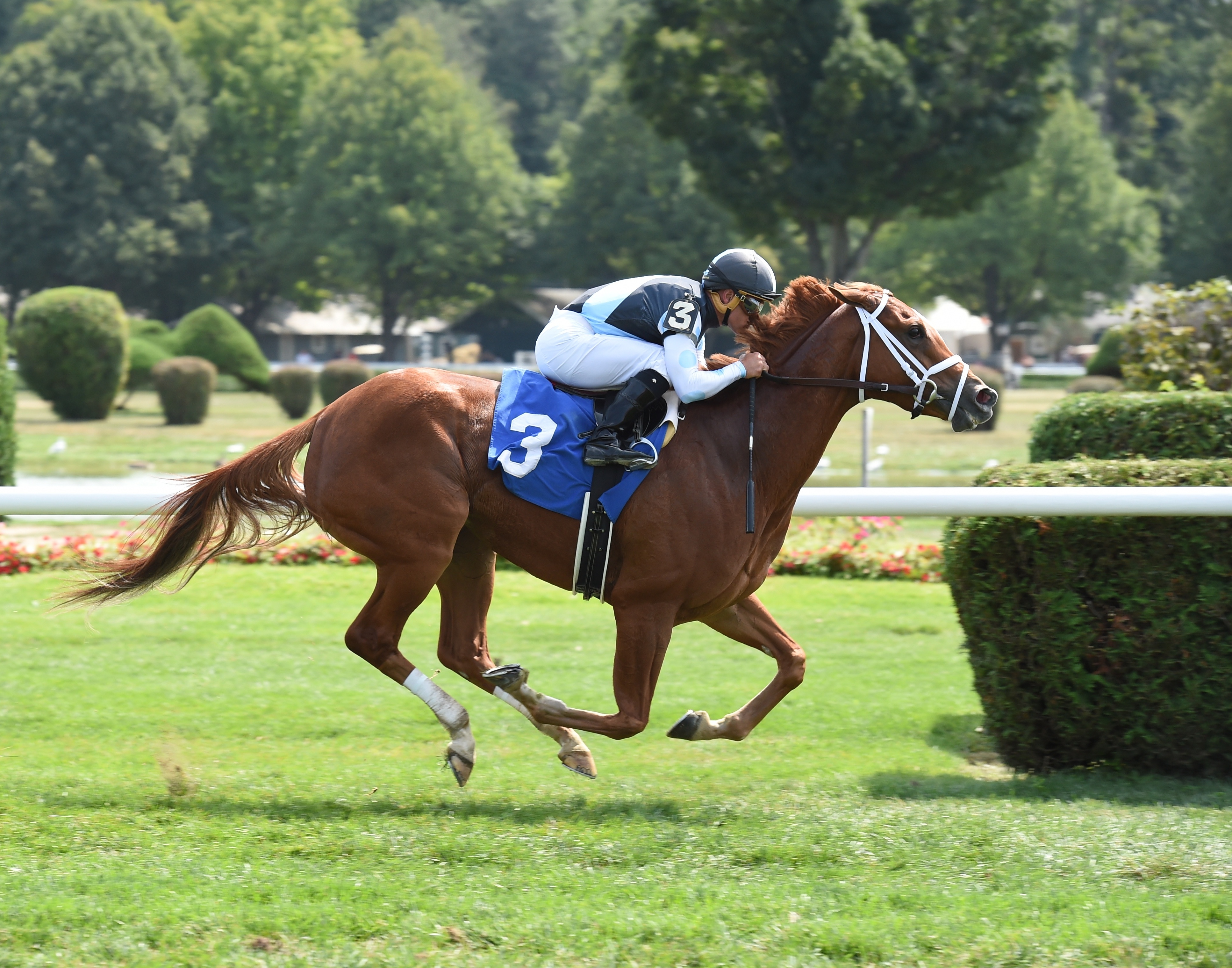 Tango Time began her career in Ireland before being purchased by ETP last June. Suffering a setback soon after arriving in the United States, Eclipse Thoroughbred Partners was not able to unveil Tango Time until July 11 at Belmont where she scraped off the rust finishing a promising fourth.

Javier Castellano gave this Todd Pletcher trainee a masterful ride Saturday. He rode with confidence saving ground and patiently waiting for a seam to present itself and allow Tango Time to show the 50,000 in attendance her magnificent ability.

Like Desert Steel, Tango Time also showed stakes can be in her future. 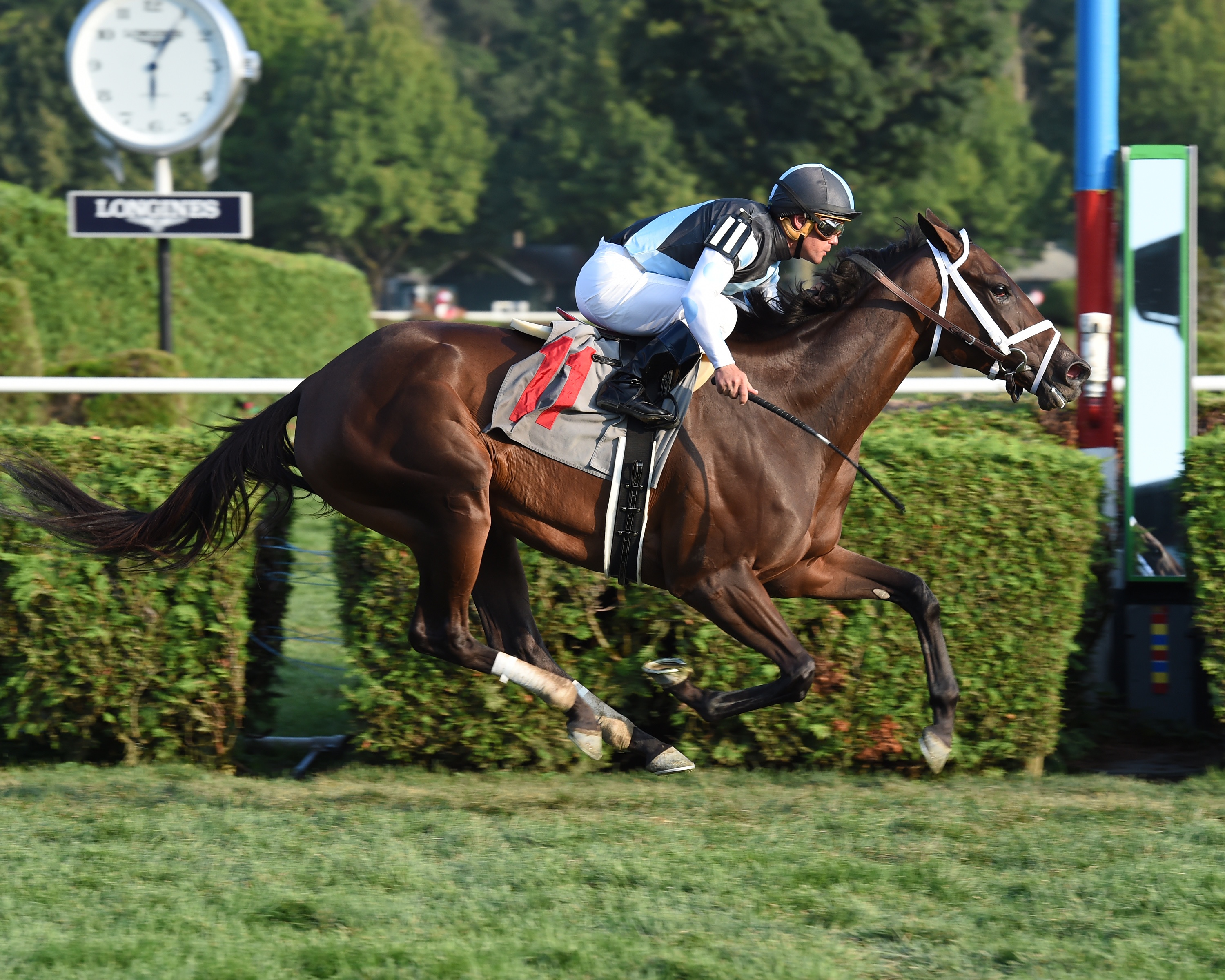 Coming off of back-to-back second place finishes in the American Oaks (Grade 1) and the Lake George Stakes (Grade 2), Feathered (left) returned to the winner’s circle on Sunday at Saratoga. Breaking from the far outside, Javier Castellano was able to maneuver this three-year-old daughter of Indian Charlie to the rail before reaching the first turn. So as not to get involved in a duel early on with two others intent on getting the lead, Castellano tucked Feathered into the third position. Patiently handled, Feathered found an opening at the top of the stretch and quickly took control like good horses do. She was drawing away from the field going under the wire by a widening one and three-quarter length advantage. Feathered completed the final quarter in a lightning fast :22 flat.

This was Eclipse Thoroughbred Partners fifth victory at the very prestigious Saratoga meet ranking us tied for fourth in the Leading Owners list.

Sunday’s win was a stepping stone for our ultimate goal – the $500,000 Queen Elizabeth II Challenge Cup (Grade 1) at Keeneland on October 10. Winner of the Edgewood Stakes (Grade 2) at Churchill Downs on Kentucky Oaks Day, Feathered has now amassed $574,974 in career earnings, finishing off the board only once in 11 starts – stamping herself as one of the premier three-year-old turf fillies in the nation.

Matterhorn, coming off of two authoritative Allowance victories at Belmont and Saratoga, finished a good third in the $150,000 Philip H. Iselin Stakes (Grade 3) at Monmouth Park in New Jersey on Sunday in his return to grade stakes action. This four-year-old son of Tapit found his groove this spring and summer having racked up three impressive wins since May. Ridden by Joe Bravo for trainer Todd Pletcher, Matterhorn showed he clearly belongs in stakes company and we believe there is one out there with his name on it.