This is an exciting time in the horse racing world as the much anticipated race meets at Del Mar in California and Saratoga in New York have begun. While the baby blue and black silks of Eclipse Thoroughbred Partners will be represented at both tracks this weekend, the action will begin Saturday, July 19, at Monmouth Park in New Jersey when Super Sky runs in the $60,000 The Desert Vixen Stakes.

Super Sky, a three-year-old daughter of Sky Mesa, strives to attain black-type status thus enhancing her value as a broodmare prospect when she competes against ten others in the eleventh race on the Jersey Shore. We would love to see Super Sky duplicate her winning performance over the Monmouth turf back in May. She covered one mile and one-sixteenth that day and the distance is the same Saturday. Super Sky, trained by future Hall of Fame trainer Todd Pletcher, is coming out of the $100,000 Wild Applause Stakes at Belmont Park where she was beaten only 2 ¼ lengths. She will be ridden by Abel Castellano at 5:59 ET. 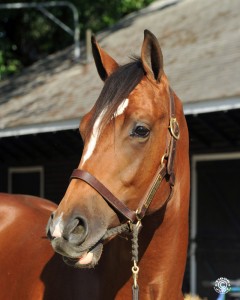 Sandler, a two-year-old New York-bred son of Into Mischief, will make his racing debut in the first race at Saratoga on Sunday at 1:00 ET. Sandler will cover five and one-half furlongs against seven others – all but two making their initial starts. He will be ridden by John Velazquez, perennially in the thick of the leading jockeys list at Saratoga. Todd Pletcher, the reigning leading trainer, has prepared this colt for this spot. Eclipse Thoroughbred Partners has several two-year-olds who will make their racing debuts at Saratoga and we look forward to having Sandler get us off on the right foot.

On Sunday, Press Baron (GB), a five-year gelded son of King’s Best, will attempt to have history repeat itself “Where the Turf Meets the Surf.” A winner over the Del Mar grass course in 2012, Press Baron returns from the east coast with his sights set on a “Ship & Win” bonus when he competes in an Allowance/Optional Claimer covering one mile and one-sixteenth over the turf. He will be chasing a purse in excess of $102,000. Press Baron won two in a row in Florida in March and April. Now trained by Paddy Gallagher, he will be ridden by the hotshot apprentice Drayden Van Dyke in the seventh race at 5:00 PT.