Consolida ($17.40) was last early as she made her U.S. racing debut in the $51,625 California Oaks at Golden Gate Fields on Saturday, but the British-bred filly proved her superiority in the stretch as she rallied after getting clear to score an easy victory. 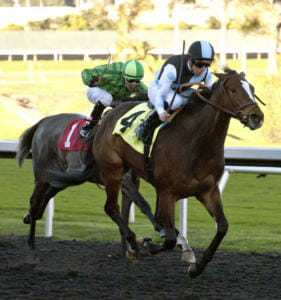 Making her first start since a maiden victory over a synthetic surface at Newcastle on Oct. 10 in only her second start, Consolida had to dodge around a tiring Bornonvalentineday in the stretch. Once in the clear, she quickly spurted to the lead, actually increasing in margin over runner-up Tinabud, who was also finishing well but proved no match.

The Sir Percy filly defeated Tinabud by 1 1/4 lengths, covering the 1 1/16 miles in 1:45.48. Divine Mercy was third another 1 1/4 lengths back, nipping Sweetsongofthenile by a nose.

Aniva Bay outdueled Bornonvalentineday early and held the lead to the stretch before tiring and finishing fifth.

Consolida was last under Julien Couton but began to inch up while three wide down the backstretch and around the turn. She was gaining ground into the lane as she approached the tiring Bornonvalentineday.

She shifted out for running room as she proved superior late.

She had six works for Gallagher since arriving in his barn at Santa Anita in December, but proved plenty fit.

She is the first foal of the winless Red Larkspur, but her second, third and fourth dams were all sisters of millionaires, including two-time Breeders Cup Turf champion Conduit.