Without a turf stakes on the calendar for Sharing’s division, Aron Wellman, head of Eclipse Thoroughbred Partners, said in recent weeks that connections were taking a “slow and steady approach” to the Maryland-bred filly’s training.

The Breeders’ Cup Juvenile Fillies Turf winner is pointing for Churchill Downs’ $100,000 Tepin Stakes on May 23 for her season debut. At a mile on the lawn, the Tepin is restricted to 3-year-old fillies. 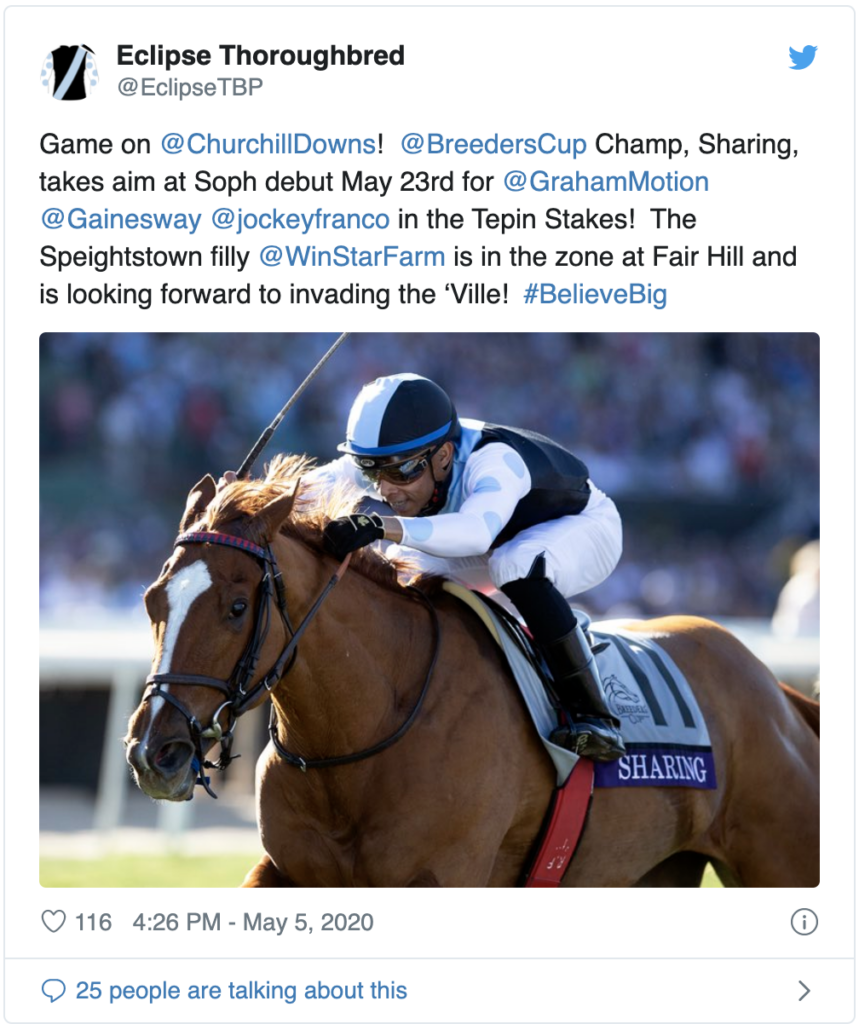 The Graham Motion-trained Sharing went 3-for-4 last year, improving as the distances increased after finishing third in her Saratoga debut going 5 1/2 furlongs. Sharing stretched to 7/8 of a mile when breaking her maiden at the Spa, then won Laurel Park’s 1 1/16-mile Selima Stakes leading into the Breeders’ Cup.

This season, connections first passed up the March 7 Florida Oaks (G3) thinking Pimlico’s Hilltop Stakes could prepare her for a run at Royal Ascot. But racing has since shut down in Maryland due to the COVID-19 pandemic. A new schedule was required.

Based with Motion at the Fair Hill training center, Sharing, by Speightstown and out of Shared Account — both Breeders’ Cup winners themselves — tuned up Saturday with a bullet 3/4-mile breeze in 1:13.60.

Churchill’s Tepin is one of four new stakes offerings on May 23 along with the Blame for older horses on dirt, the Shawnee for older females and War Chant for 3-year-olds on turf. Additionally, the 23rd renewal of the Matt Winn Stakes (G3) — now offering points toward the Kentucky Derby — tops the card.