Reminders of Tapwrit‘s best form will be splashed across Belmont Parkover the next several days.

With the 150th edition of the Belmont Stakes (G1) over the oval known as Big Sandy just a week away, every TV and social media channel connected to the Long Island track has had the final portion of the 12-furlong test from a year ago on repeat—namely, the gray/roan son of Tapit  steadily reeling in pacesetter Irish War Cry before drawing off by two lengths to make good on every expectation he had been carrying since his days as a million-dollar baby.

As the one-year anniversary of Tapwrit’s triumph looms, nostalgia is washing over his connections hard and fast. Enjoyable as it will be to relive that classic achievement over and over again, what his team would relish most in advance of the week’s festivities is a fresh image of his steel-colored frame hitting the wire first.

The site of Tapwrit’s career-defining moment will, appropriately enough, be the venue where he launches his long-awaited 4-year-old campaign. The Todd Pletcher trainee is slated to end a 10-month hiatus June 3 when he heads a field of six entered in a 1 1/16-mile optional-claiming allowance race at Belmont. 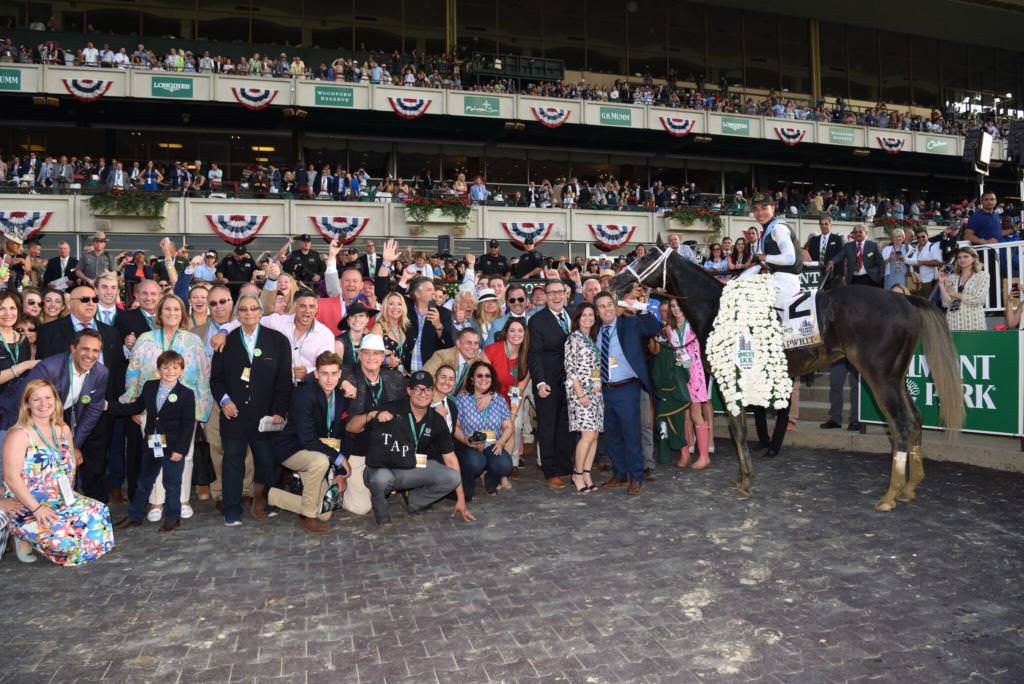 Endless replays of Tapwrit’s victory last year will be useful this week, as some fans may need a quick refresher course on what the former $1.2 million sale purchase looks like in a competitive setting. After finishing fourth in the Aug. 26 Travers Stakes presented by NYRA Bets (G1)—his lone start after the Belmont Stakes—Tapwrit went to the sidelines with a foot issue that took its time resolving itself.

Although the physical setback necessitated Tapwrit’s time off, his ownership group of Eclipse Thoroughbred Partners, Bridlewood Farm, Robert LaPenta, Whisper Hill Farm, and Gainesway Stable hope it was a blessing in disguise following a sophomore season that saw Tapwrit make six starts and notch a victory in the Lambholm South Tampa Bay Derby (G2) prior to the Belmont.

“(The foot) was the issue, and it just took a little longer than we had all anticipated for it to come right,” said Aron Wellman of Eclipse Thoroughbred Partners, which teamed with Bridlewood and LaPenta to purchase Tapwrit from Denali Stud’s consignment to the 2015 Fasig-Tipton Saratoga select yearling sale. “That was a physical excuse for us to give him a break after the Travers, but he had also had a long, taxing, successful 3-year old campaign. He ran three times at age 2 as well without any significant break so … it was always by design to sort of start his campaign in May or June. So we are pretty much where we had hoped to be, timing-wise, to launch his 4-year-old campaign at this point.”

No one lays out seven figures for a horse without having strong belief they will get a return on their investment. Considering Tapwrit didn’t exactly tout himself early when he finished last in his debut at Saratoga Race Course in September 2016, his Belmont success was equal parts elation and validation for those whose patience he tested at various points.